Roseworthy Agricultural College and its Influence on Gawler


Location: 10 km from Gawler and fifty from Adelaide


As well as training students in traditional courses in agricultural and oenology, the College expanded over time to include courses in farm management, natural resources, wine marketing, agricultural production and veterinary science. The College also has a proud history as a research centre. In 1991 it merged with the University of Adelaide to become the Roseworthy Campus of that university. Initially it joined the Waite Campus (Waite Research Institute) to become the Faculty of Agricultural and Natural Resource Sciences. Since the merger there have been many changes with the agronomy, wine,and natural resource related coursed moving to other campuses. The campus is now primarily animal and veterinary science focused.

For the University of Adelaide's Roseworthy Campus page click here

For the University of Adelaide's history page click here 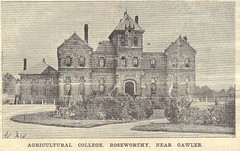 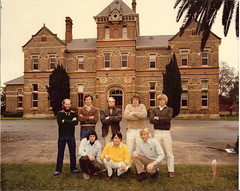 Memories of Roseworthy Agricultural College and its Influence on Gawler

Icoope01 remembers: In Chapter 11 ‘Days of Wine, Dust and Roses’ of ‘Roseworthy Agricultural College-A Century of Service’ Jeff Daniels records edited excerpts of interviews of old scholars and staff of the college. Many mention the relationship of the institution with Gawler.

WaIter Terry, a student at Roseworthy from 1898-1900 notes details of the means and the problems of transport to and from the College in the late 1890s. The roads between the Roseworthy township railway siding and the College, or between Gawler and the College, which were respectively the main points for the despatch or receipt of goods or for regular rail connection to Adelaide, have continued to be a longstanding cause for dissatisfaction at the College. The road to Roseworthy township remains unsealed to this day, and the road from Gawler which runs past the College to the mid-north was sealed only in the late 1960s. Terry points out the need for leaders for the horse teams to get waggons to Roseworthy or drags to Gawler.

William C. Keaney attended the College as a student on a scholarship for three years from 1905, and spent his first year there living in the uppermost room in the main building, known to his generation of students as 'the garret'. He recounted some of his experiences at the College in an interview in October 1976, when he was aged 89 years:

Our daily life there comprised being inside one day for lectures and the other day out on the farm doing practically all the farm work, although two or three farm labourers were also employed. If you were unlucky you would be appointed to stables or dairy, and notwithstanding that it was your lecture week, you'd have to get up about five o'clock and groom the horses etc. or start milking. And as far as the cows were concerned you had to do the milking again late in the afternoon.

Whilst I was there we had several chaps from Western Australia as they didn't have a college there. We had a chap from Germany who'd been used to riding around the estate wearing gloves ... and found it a very great change to come to Roseworthy. We had another young fellow from England who'd been a European correspondent for English papers and used to turning night into day. Well the change to Roseworthy with some discipline-where you couldn't go to Gawler when you wanted it-was a bit irksome for him.

Saturday night leave was always a bit difficult to get from Roseworthy, and the transport was equally difficult. In those days there were no motor cars available, no motor bikes, and not many of us had bikes, so those who had bikes and were lucky enough to get leave would spend the Saturday evening in Gawler, or others would get a ride in the College vehicle. In those days the hotels were open until 11 o'clock, which was very much appreciated.

Altogether we were a fairly happy family at Roseworthy: plenty of opportunity for sport, we were not overworked and lectures were not too difficult. The difficult period of course was immediately preceding examinations when we really all had to put our heads down.

F. A. Wheaton attended Roseworthy from 1908 to 1911. He agreed to be interviewed on 26 June 1979. He, like Keaney, attended Roseworthy on a scholarship, for the examination for which he was tutored by the schoolmaster at his home town, Redhill. I have often looked back on those days and thought of the wonderful chaps that were there at that time-and they were men that have made their mark.

Do you remember Roseworthy Agricultural College and its Influence on Gawler ? Then Join up and add your memory here.