This morning I would like to talk about how I see ANZAC Day. To me as a returned solider I find that the day represents to me and my men and women of my time the following three things:

1. Why do we commemorate ANZAC day.

2. What does the name mean to me and the current ADF personnel?

3. The nature of the ANZAC legacy.

Let’s talk about where it started. When the troops landed at Gallipoli in 1915 I think how glad I was not there to face what those brave men did. I can only think in awe what they must have gone through at Gallipoli which was the first major battle we Australians fought as a nation... Even though we had been in other conflicts the federation of states came together to fight that war.

Gallipoli lasted eight and a half months. In that time 7,600 Australians and 2,500 New Zealanders were killed. After Gallipoli, Australians won many famous battles in France, Flanders and Palestine in that Great War. We have fought in many wars since WW2, Korea, Malaya, Borneo, Vietnam, Iraq, and Afghanistan.

My second point about ANZAC concerns the very term, ANZAC day. If you think about it, ANZAC is not a battle, and ANZAC is not a place, ANZAC is a collective noun for a group of people. Thus ANZAC day gives us as a nation the opportunity to think as individuals, ordinary Australians serving the nation in times when we as a democracy have seen our land or interests threatened in such a degree that is as been necessary for us to go to war.

We think of all those who have served. We salute their fellowship and courage.

We think of the families, those who stayed behind... They have to battle their own problems in the tough times when their husbands, wife or partners are in the area of conflict. We salute their endurance and strength. We think of past prisoners and wounded and those who suffer today.

Above all, on ANZAC day, we honour those who died for us and the nation and for our peace. But what of the ANZAC legacy?

This day ANZAC is for the people and the way in which we mark it. It is not a day of military parades or power. It is a day of gatherings of veterans, or reunions, of services, of community involvement, of reflection and honouring our fallen.

It we do celebrate anything on ANZAC day it is the legacy that those who fought at ANZAC gave us, and those who followed them which strengthened and enriched in the face of of adversity, the ANZAC‘s demonstrated beyond any doubt the necessary military virtues of duty, courage, teamwork, resolution and above all self-sacrifice.

The ANZAC’s added to this their own unique qualities several things of their own, mateship, trust, a discipline based on earned respect and not assumed worth, initiative, resourcefulness, humour and, what is often forgotten, a respect for the courage and capability of friend and foe alike. The excellent and unique reputation surrounding ANZAC survives even today in all our armed forces.

ANZAC day is a great Australian and New Zealand tradition. It is celebrated over two nations where ever both countries serve overseas. It is our day- a day to remember with affection the courage of people and the value of friendship- to honour the dead and to acknowledge those who suffer still from the effects of war.

Please today at this special occasion remember our current ADF personnel wish them well and their families. Some of those people standing with you today will be returning overseas soon so have them in your prayers and wish them god speed.

Remember we do not celebrate victory or glorify war- we celebrate the human spirit-the spirit of the ANZAC.

We thank Paul for this contribution.

This reading is an ancient poem written by a King who was no stranger to the theatre of war. His name was David and he led his nation to victory in many battles. He was also a musician and poet and he wrote these words:

A psalm of David.

1 The Lord is my shepherd, I lack nothing.

2 He makes me lie down in green pastures, he leads me beside quiet waters,

3 he refreshes my soul. He guides me along the right paths for his name’s sake.

4 Even though I walk through the valley of the shadow of death, I will fear no evil, for you are with me; your rod and your staff, they comfort me.

5 You prepare a table before me in the presence of my enemies. You anoint my head with oil; my cup overflows.

6 Surely your goodness and love will follow me all the days of my life, and I will dwell in the house of the Lord for ever.

David is remembered as the greatest King from Biblical history. He is described as being a man after God’s own heart; he knew God, he understood the heart of God enjoying a depth of relationship with God that I think is frankly enviable.

But this is not a Hallmark Card. David knew reality; his feet were well and truly grounded in the harshness and messiness of the world. David knew that Death is a certainty. He had seen it firsthand. He had dealt death out. He knew death as certain for the men he lead into battle as for himself.

And it is certain for us too. Death is the great leveller; we all stand equal before it. It doesn’t matter who is the smartest or richest, most athletic, famous or creative. It cannot be outthought, bought off, outrun or wooed. It is the destiny of every person to face death. David knows this.

David’s prayer isn’t that he would be spared of suffering; that he would dodge death. Rather his prayer is that in the face of evil he will not fear. That even though he walk through the valley of Death itself – he rejoices to know that God is with him in the midst of his suffering – even in the presence of his enemies David enjoys God’s provision.

Today there will be many stories told; memories shared. I’m confident that mateship, camaraderie and solidarity will feature in those stories. For David – his companion is the living God. Today, as we remember those who were willing to give their lives and honour those who are prepared to make the same sacrifice today, let us give thanks for the mates, families, lovers, comrades and friends who walked together through the Valley of Death. And let us rejoice with those we walk with today.

We thank David for his contribution. 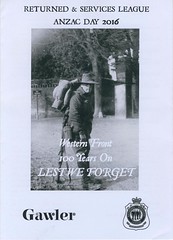 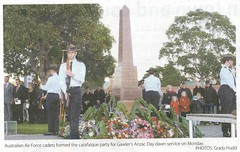 Do you remember ANZAC Day 2016 ? Then Join up and add your memory here.