This pair of late-Victorian attached dwellings is constructed of coursed sandstone with red brick dressings with overpainted rubble side walls all with rendered moulded caps.

The roof is hipped with parapeted gable projecting bays to the façade, clad with corrugated galvanised iron. Windows are timber-framed and double-hung, and doors are timber-framed with fanlights. A large, central overpainted brick chimney, features banding and dentilled caps. The verandah has an ogee profile and is clad with corrugated galvanised iron.

The fence to the front boundary is a non-original low rendered wall.

Built in 1881, during a time of major growth of local industry, the paired dwellings demonstrate the period of industrial development associated with the establishment of the railway line to Adelaide which provided and easier means of transporting goods. They are a high-quality example of the type of dwellings constructed during this period, featuring homogeneous local stone and brickwork and Gawler-style detailing typical of that time.

Its ownership by a fitter, likely of a local manufacturing company, is an indication of the direct relationship between this type of residential development and the local industrial success.

Originally named ‘Murray Street’ on the registered plan, Allotment 67 was developed by James Paternoster, Fitter, of Queen Street in 1881 with the stone dwellings. Purchased by W Thomas Hutchinson in 1883 and R March in 1884, the property continued to be tenanted by Paternoster until his death in 1884.

For a short period around 1900 the building was used as a dwelling and shop; the business being owned by David Thomas, Iron Founder, of King Street and William Sands, a Fitter. 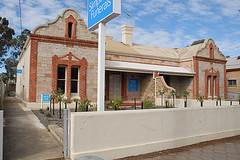 Do you remember Adelaide Road 22a & 22b ? Then Join up and add your memory here.