It is constructed of coursed, overpainted dressed sandstone with brick quoins and dressings, with rendered mouldings.

The roof is hipped, with projecting gables to the front and south-west. Chimneys are of overpainted brick. Windows are timber-framed, double-hung sashes and are paired with arched heads to the projecting gables.

The concave verandah is clad with corrugated metal and supported on square timber posts with a cast-iron frieze and brackets.

The villa features decorative carved timber detailing including beam below the verandah, and lacework panel with finial to the front gable. A parapeted wing is situated to the north-east side.

Likely constructed during the late 1880s, the dwelling is an intact example of quality residential development which occurred along Adelaide Road at the time of prosperity in Gawler, strengthened by a peak in surrounding agricultural and industrial activity.

The dwelling is of quality construction, materiality and detailing and demonstrates the prosperity of the area and its prominent position along the major roadway linking the Gawler railway Station and Gawler township.

The dwelling was successively owned by management of prominent local businesses, Joseph May and, later, Eudunda Farmers’ Co-Operative, demonstrating a connection between the success of local industry and the demand for quality residential building stock in the area.

Gawler South was surveyed and subdivided for sale in 1858, following completion of the main railway to Gawler in 1857. With the new railway terminus located in Bassett Town, to the south of the main township, Adelaide Road was anticipated as the principal link between the two. A number of large individual and paired dwellings were established along the major roadway to Gawler during the late nineteenth century, reflecting the successful establishment of significant industry in Gawler South at the time.

Samuel Nottle, Farmer, near Gawler, purchased Allotment 42 in December 1885. The property then transferred twice - to William Roe Lewis, Solicitor of Gawler in 1888 and John Charles Davies, Fitter of Gawler South in 1889 – before being purchased by Joseph May in 1893.

Joseph May (1844-1922) was an engineer for 30 years with the pre-eminent family business, May Bros. & Co., which had been established in 1885 in close proximity at Bassett Town. May owned the property until 1919 when it was transferred to the Eudunda Farmers’ Co-operative Society Limited; thereafter used as a company manager’s residence until 1959. 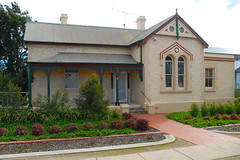 Do you remember Adelaide Road 27 ? Then Join up and add your memory here.