“Atten-shun!” and “Quick March!” was the first litany that I learnt when I joined Gawler’s No 8 Flight of the Air Training Corps as a skinny 14 year old in 1957.

Tuesday evenings in the Foresters Hall in Murray Street (since demolished) began with a parade. Soon the old hall echoed to the sound of “Left, right, left, right, left” and the sound of marching boots. After I turned 14, I was kitted out with a blue serge winter uniform (including a great-coat), a khaki summer uniform, given a service number, 34616 and a little blue book to record my progress. I soon learnt that my boots had to shine like a mirror.

“Shoulder arms!” and “Present arms” were shouted as we learnt to handle our World War Two Lee Enfield point 303 rifles. Yes, it was only 12 years after the end of hostilities. Saturday mornings saw us at the Gawler Rifle Range near the present suburb or Evanston Park. We lay on shallow mounds and learnt to aim our wavering gun-sights on the target and handle the explosion of live ammunition and the recoil of the rifle into our shoulders. We also travelled by bus to the Dean Rifle Range to compete against other ATC teams. We also had a turn at firing a Bren Light Machine Gun in 1958. Part of our training involved dismantling these weapons, cleaning and reassembling them. This was all exciting stuff for a teenage boy, but when I left the rifle range I often heard ringing in my ears. Later, audio tests confirmed noise damage to my hearing.

I attended annual camps in school holidays in January and May at Mallala RAAF Base, where we gazed in awe at the Mustang fighters with their huge engine nacelles. Peeling potatoes at mess duty brought us back to earth. We learnt to fold a bedroll and dust our bedrooms meticulously. Through watching projected pictures of aircraft we learnt the difference between a Messerschmitt and a Mustang and the shapes of many other aircraft. Aircrew lives depended on being able to do this. I was interested in radio and was one of a group of other like minded cadets who were given a tour of the 24 Squadron radio workshop. I recall our flight sent out on a route march and singing war-time marching songs as we traversed the base. It was a great experience to be taken on a flight in a RAAF Dakota, twice in 1958 and another flight in 1959.

Our activities were later transferred to the old migrant hostel buildings in Willaston. This was an appropriate location because it had originally been the site of the World War Two base which housed a US Air Force Squadron. We began our Tuesday evenings by forming up on the outdoor parade ground. We were given a turn at “flying” a temperamental Link Trainer an early version of the present day flight simulators.

Our commanding officer was the late Flight Lieutenant Roly Day, a genial, but firm farmer from Reeves Plains who had taught raw RAAF recruits how to fly in Tiger Moths at Parafield Airport during the war. I realised later in life what a debt of gratitude I and others owed to him and the other officers who organised such a wonderful program of activities.

We had regular excursions to Adelaide which enlarged our horizons. Once we visited Adelaide Airport and were actually able to enter the control tower. We also visited the ABC Radio studios and HMAS Melbourne on different occasions. On the way home it was vital to allow teenage boys to stop at the pie cart which stood on the north side of the Gepps Cross intersection. In Gawler we toured the telephone exchange. One night I was chosen as a model for the naval officer who had come to speak about the work of clearance divers. As the officer explained the diver’s kit, I was dressed in the rubber suit, face mask, air tanks and flippers worn by naval divers.

Once every year came the “escape and survival” exercise. This was very real training to prepare aircrew for being shot down over enemy territory. We were dropped off in pairs near Mount Crawford on a Friday night and had to find our way back to Gawler Aerodrome by early Sunday morning without being seen. And….the police were looking for us! Dressed in blue service overalls, we carried only a map, a compass, water canteen, water purification tablets and a block of dark chocolate. My fellow cadet and I walked along gravel roads at night, diving into the bushes when we heard a car coming. By day, we crept through bushland, found water in streams and slept when we could. It was a fascinating but very tiring exercise. I recall once finding a haystack at the top of Calton Road, and had a very refreshing snooze, keeping warm in the straw.

In the real Air Force, young airmen might have to live in tents at a temporary air base. For that reason we attended an annual bivouac in the Para Wirra Conservation Park, setting up our tents in a very deep valley in a location known as the devil’s nose.

Our basic training included subjects such as Armament, Navigation (map reading) and Aircraft Recognition. As well as these subjects, proficiency training also included Service Knowledge (which included learning the badges of rank of all three armed services in Australia), Meteorology and Administration. In 1958 I was selected for the Junior Non-Commissioned Officer (NCO) course at RAAF Mallala and promoted to corporal. The following year, I attended the senior NCO course and was promoted to Sergeant.

One evening, our commanding officer, Roly Day suggested that I apply for a flying scholarship. I was in fourth year at Gawler High, aged 16. I was sent to the ATC HQ in Barton Terrace, North Adelaide for aptitude tests and an interview. I recall having to read dials and note the readings indicated. At my interview, I was asked if I was interested in joining the RAAF to become a pilot and I truthfully said I wasn’t sure. Despite this and much to my surprise, I was awarded a scholarship and began my flying training in late 1959 with the Royal Aero Club at Parafield Airport. I gained my private pilot’s licence and was able to continue flying until the end of the year I turned 18. However I did not apply to join the RAAF for training as a pilot because I was having difficulty with my hearing loss which made it hard for me to hear air traffic control radio instructions in the noisy cockpit environment.

Early in 1960 Roly Day asked me if I would attend the Cadet Under Officer course at Mallala. I said, “No, I’m starting work soon.” I was to begin a radio apprenticeship at Weapons Research Establishment in Salisbury. A couple of months later, the ATC officers sprang a surprise on me. One Tuesday night it was announced that I had been promoted to Cadet Warrant Officer.

I enjoyed every minute of my four years in the Air Training Corps; and what a useful extra-curricular activity it was during my years of study at Gawler High School. I learnt much about discipline, leadership and a mysterious quality called “Esprit de Corps”.

We thank Geoff Graetz for his great contribution. If there are others who can contribute additional experiences and/or photographs, please send them to us. 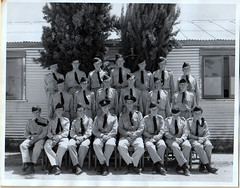 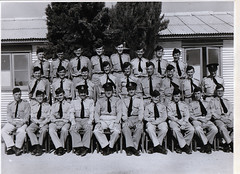 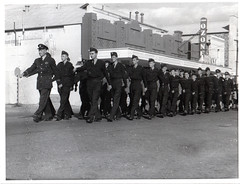 Do you remember Air Training Corps Gawler 8th Flight ? Then Join up and add your memory here.