James Wilfred Alcock Right-Reverend Abbot, OSB (OSB = Ordo Sancti Benedicti - a monastic Catholic religious order of monks and nuns that follow the Rule of Saint Benedict. They are also sometimes called the Black Monks, in reference to the colour of the members' religious habits).

James Wilfred Alcock was parish priest of St Peter and Paul’s Catholic parish in Gawler from 1877 until 1880.

To understand him one needs first to understand the letters after his name. They tell that he was a member of the Order of St Benedict, an order of monks which was founded in the sixth century. Usually, the Benedictines would stay and work in the monastery where they trained but at Subiaco in Italy the expectation was different. There Dom Casaretto was interested in the missionary tradition of the Benedictines and included a Missionary College in his abbey. Fr Christopher Reynolds, a previous parish priest at Gawler and later Bishop of Adelaide, had spent a year there. James Wilfred Alcock was the first of the group from the Mission College to be ordained.

He went to England and founded a mission there at Ramsgate. He built a monastery and established Ramsgate College for boys. Then the monastery was raised to the abbey status, meaning that Alcock himself became an abbot instead of a prior. An abbot wears a mitre and is equal to a bishop.

But the early success was followed by financial troubles. His bursar seems to have acted unwisely but, as abbot, Alcock had to accept responsibility. After a canonical enquiry, he was deprived of the office of Abbot but allowed to keep the title. He also had to leave England, taking only one companion with him. Thus he arrived in Gawler with Dom Anselm Fox in October 1877.

Alcock was an eloquent and learned speaker. He often gave lectures which attracted a large audience of all faiths. Often these were at the Gawler Institute but at times were in the Adelaide Town Hall. At least once he lectured to a large crowd in the Goods Shed at the Railway Station at Hamley Bridge.

During the time Mary MacKillop was excommunicated, Alcock was able to advise her and encourage her in her work.

In 1880 a decision was made in Rome that the Benedictines were to go to New Zealand. That decision was accepted by the Benedictines though both Bishop Reynolds and the parishioners complained and The Bunyip recorded “the sense of loss the whole community Protestant and Catholic is about to sustain.”

In New Zealand, Alcock’s rheumatism worsened with the damp climate and cold. He died there two years later.

We thank Pat Sheahan for this information. 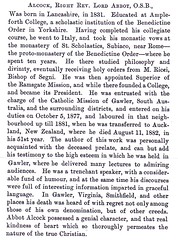 Do you remember Alcock Rev James Wilfred ? Then Join up and add your memory here.