Allwood Drive is in a unique position because it overlooks Dead Man's Pass and Gawler Terrace and is able to epitomise Gawler's 'the best of town and country' feeling, as, from Allwood Drive, you can see the township to the north and the countryside to the south.

With regard to the attached pictures which show Allwood Drive from across the South Para River, as it looked in 1960 and 1973, the following words are a personal account as a result of living in Gawler Terrace.

The near-side river bank shown across Gawler Terrace was often set up with jumps for horses; the river area beyond was the site of Gawler's 3 Day event. Sheep and some cattle used to graze here and it often displayed a magnificent colour from the Salvation Jane growing on it. The far jump by the river bank was close to the river's edge over which, in the 1940's to 1960's the residents of Gawler Terrace used to dispose of their rubbish. Periodically the mound of rubbish was so great that we children were sorely tempted to set it alight. Accordingly, during winter it was not uncommon that this dump smouldered for days. In those days, apparently the prevailing attitute was that all will be solved when the next flood washed the rubbish all away. Over the years I have seen floodwater spilling over this land and our near neighbour Rosa Sweeney said that she saw water up Gawler Terrace to the position of the base of the Stobie Pole on the corner of 11 and 13 Gawler Terrace. 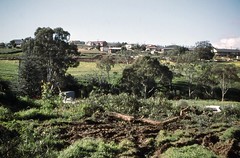 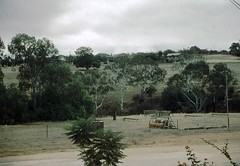 Do you remember Allwood Drive ? Then Join up and add your memory here.