This land was originally titled Gawler Blocks and along a road called Government Rd. The house and land (18 acres) were owned by George and Mabel Paine from 1935-1957 who had bought it from the previous owner James (Jimmy) Croft. The son Samuel Paine and his wife Phyllis lived with George and Mabel in the house until they built across the road in about 1954. George and Mabel followed suit in 1957 after selling the land to Frank and Vince Bombadieri.

The land was used to grow tomatoes and other fruit and vegetables and flowers. The family would make their own passata from the tomatoes grown in the greenhouse. Pigs and chickens were also on the land. The house basically laid dormant since the mid-1970s

A developer bought the land and it will be turned into 19 separate blocks. There is no indication if there will be any kind of name or recognition of the Bombadieri family on the land.

The house and land were cleared and gutted on the 12th of October 2021 and on the 13th the demolition commenced. The roof was apparently so well fixed that it would just not come off (as was the plan) and so the front and back walls were torn off ready for the side walls to be pushed in. on the 15th of October the house was officially flattened.

Please <click here> to view photos of the building prior to, and during demolition.

Gawler History Team thanks Daniel James Down for contributing his photographs and obtaining an interview with Rosa Bombaderieri. 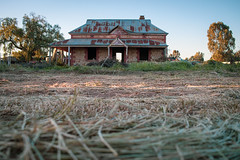 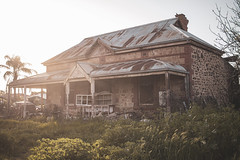 Do you remember Angle Vale Road 29 ? Then Join up and add your memory here.