Painted in oils in 1936 by Hulda Alma Dorothea (Dora) Eime of 3 Crown Street Gawler. Miss Eime studied for a time with the (later) esteemed war artist, Ivor Hele. Miss Eime was born at Rosedale on 15/12/1908 and died at Gawler on 4/8/2001. The painting was gifted to the National Trust in November, 1967 by Mr. Arthur T. Hewett of 19 Jacob Street, Gawler. (His property was later re-numbered as 30)

A Brief History of the Cottage

This building is believed to be the first stone residence in Gawler. Constructed on Allotment 91 in the early 1840’s by a Mr. Crackel, it was apparently for his own use. Earlier town residences were constructed of local timber.

In the following years the cottage was tenanted variously and in 1881 then owned by Mrs. Crackel (most probably the widow of the builder “Crackel”) it was tenanted by William Henry Baker. The tenancy included a stable as well as the dwelling. In 1936 the derelict cottage was in the possession of the long-widowed Emma Selina Baker (nee Pinson).

In 1957 the building was demolished and the site gifted by daughter Hilda Maud Baker to the National Trust Head Office, designated as a public reserve.

Subsequently the property was acquired by Gawler Town Council and was declared to be a perpetual public park. A memorial to Miss Hilda Baker was unveiled at the site on 21 May, 1989.

About the Baker Family

Complied by Joan Dost with assistance from Beverly Burke and Brian Thom. 17/3/2011 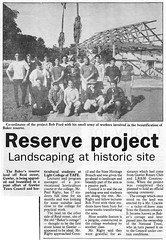 Do you remember Baker Reserve - Cr Reid and Finniss Streets ? Then Join up and add your memory here.