33 Murray St is the Savings Bank of South Australia building. The bank opened a agency in 1866 and operated from the post office from 1867. This unusual building was designed by Adelaide architects Woods & Bagot and built by Ligertwood & Parks with the painting and decorating by W.H.Cox of Gawler. Sandstone for the building was quarried at Smithfield. The building has elements of French Renaissance, Edwardian and classical styles with features including Marseilles roof tiles and Wunderlich pressed metal ceilings.The building was part of the Town of Gawler Heritage Project 2003.

In 2016, BankSA relocated to Murray Street east side opposite Jacob Lane and in 12/2016 it was observed that the 33 Murray Street building has been sold.

For more photos of the Bank SA building over the years, click here. 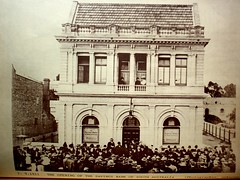 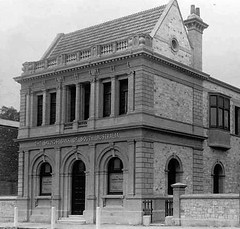 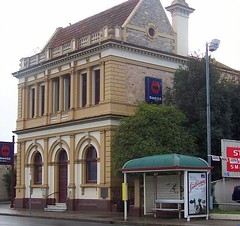 Do you remember Bank SA Building, 33 Murray Street ? Then Join up and add your memory here.