The Late Mr R H Barnet There are few more genial and good natured among men that was the late Robert Henry Barnet who passed away on Tuesday evening September 4th. Mr Barnet had not been in robust health for some time past, though nothing serious was expected to eventuate, but a few weeks ago he was compelled to seek rest and retirement from business, pending further developments of a troublesome and painful nature, but which were not expected to be of more than a temporary character. However, serious symptoms made their appearance on the Monday, and a consultation was held between Dr. H. Dawes, his medical attendant and Dr. Lendon, of Adelaide. The latter pronounced the case as extremely serious and foreshadowed a fatal termination, which as events proved, was soon to be realised: for scarcely twenty-four hours afterwards the worst had happened and a useful career had been suddenly ended: instancing again the seemingly mysterious and regrettable fiat of nature which so often removes the busy, useful and active among us and passes over the decrepit and aged who would be judged to have filled up the measure of their days, and to be waiting a call home.

Besides being the Manager and Editor of this paper, the late Mr Barnet was an active member of various local institutions, and his untimely removal will leave gaps to be filled for which capable public spirited men are not always available when wanted. Born, reared and educated in Gawler, Mr. Barnet joined “The Bunyip” staff in 1881, and working himself upwards, he succeeded to the position of Manager on the death of his father in 1895.

Later he assumed Editorial responsibility, and has since discharged the duties pertaining to the joint offices. He was also for some time Chairman of the Provincial Press Association of Australasia and made several interstate excursions therewith. His long association with the town and neighbourhood, and through the medium of “The Bunyip” had resulted in the acquisition of a wide circle of acquaintances, who will regret that he was not spared for many years to continue a career of public and profitable utility. The distressing and somewhat sudden and unexpected end to all his activities, have prompted widespread expressions of sympathy by those who knew him intimately, as well as by those more remotely associated with him, to his sorrowing widow, and the other members of his family.

The funeral of the deceased gentleman took place on Thursday September 6. It was largely attended and was conducted by Mr C.G. Rebbeck.

Prior to the funeral a Masonic Lodge of Sorrow was held at the Temple, Lyndoch road and was attended by a large gathering of the brethren of the Lodge of Fidelity as well as by several members of the Grand Lodge who journeyed from Adelaide to take part in the stately, impressive and solemn service conducted in accordance with ancient usage by the W.M. of fidelity, Bro. P C Dawkins assisted by Chaplain Wpl Bro. S.T.C. Best, the Director of ceremonies being Rt Wpl. Bro. R.K. Thomson, the brethren then formed in procession and preceded the cortege from the residence of the late Wpl. Brother to the grave in the Willaston Cemetery. The Rev. S.T.C. Best officiated at the graveside. The Gawler Lodge of Oddfellows, M.U. was represented by Messrs. W.R. Lewis, Edward Potter, T White, P Cheek, N.F. Martin, A. Stott, R Hayles and A. Stewart, the latter reading the Lodge burial ceremony. Some of the members of the staff of “the Bunyip Office”, headed by the foreman, Mr A. P. Armstrong, and Mr W. Shannon paid a graceful tribute by following the remains of their late officer to the graveside. The Gawler Jockey Club was represented by Messrs Wm Burns, A G. Taylor, J.G. Folland, J.J. Mortimer, H Haydock and M.F Othams. The Masonic Lodges were represented by Bros:- P.C. Dawkins W.M., F.J.J. Freak, Thos Coombe, J.T. Parker, R.K. Thomson, Jas. Beasley, W.H. cox, Jas. Robinson, E.E. Robilliard, D Dunsmore, Alfred May, E.C. Murrell, Jas. T. Rowe, W.J.H. Bassett, W Antwis, D Rowley, D.C. Connor, L Barkla, E.M. Miller, A.J. Adams. H.E. Laffer, C.B. Fairhead, R.M. Nairn, H.L. Marsh. G.L. Ball, W.G. Payne, J.H. Evans, W. Williams, J.J. Baker, T. Stanley, R May, W Corey, C Eyers, W. Brook, E Gwynne, A Withers, S.N. Beadnall, W Day, R.S Disher, W. A Allen, F.V. Parker and the Rev. S. T .C. Best.

There was also a very large and representative gathering of citizens, of societies, of friends, from the district and various parts of the State assembled to pay the last tribute of respect. Among the many tributes of flowers were wreaths from the Staff of “The Bunyip” Office, Lodge of Fidelity, Mark Masons Lodge, S.A. Provincial Press Association, S.A.J.C, A.R.C., P.A.R.C, Tattersalls and Gawler Jockey Club, and a very large number from other representative bodies and friends.

(An Appreciation By One Honoured By His Friendship)

The public of Gawler and district were greatly shocked to hear of the demise of Mr R.H. Barnet on Tuesday evening of last week, as few outside the family circle had any idea of the seriousness of his condition. Most people knew that he had entered the Hutchinson Hospital for the treatment of a carbuncle but were not aware of the complications that ended in its prime a busy life and useful career.

The town of Gawler and the State are the poorer today through the passing away in the midst of lifes activities of such a kindly soul as R.H. Barnet familiarly known to all as “Bob”.

He had ever a cheery and kindly word for all, and if not in his power to do a good turn for any one would never do a mean one, he was generous even to those with whom he differed and during the 30 years of our acquaintance I have never heard him speak unkindly of anyone. He may have had his foibles, who that is human has not, but take him all in all he was a just, upright and honourable man, faithful to his friends, false to none, and esteemed by all, and now that he has passed into “that undiscovered country from whose Bourne no traveller returns” we mourn our loss, and extend our sympathy to his sorrowing widow and orphan children as well as to the family from which he sprung, whom all in Gawler know so well and so highly respect.

Mr R. H. Barnet was born, educated and performed his lifes work in this town of Gawler. In 1895 he assumed the management of “The Bunyip” on the death of it’s founder, his father the late Mr William Barnet, and later took over the editorial duties as well as performing his task with considerable success and ability.

In casting the mind backward in the past days we remember that he was Captain of the Central Tennis Club for over 30 years, was Hon. Secretary of the Prince Albert Cricket Club for several years, Captain of the Second twenty Albion footballers, Captain of the Central Football Club, delegate of the Gawler Albion football Club to the S.A. football Association, and was also an active player, he was vice-President of the Agricultural Society and for many years acted as arranger on the Committees connected with this society. We also remember that he was a member of the Athenian Christ Minstrels, and the Gawler Amateur Comedy and Dramatic company, which gave many benefit performances in and around Gawler. The late gentleman also appeared in the successful production of the comic Opera H.M.S Pinafore by juveniles in 1881. During later years Mr Barnet has been closely identified with the Gawler Jockey Club and for many years he acted as Hon. Treasurer and on the formation of the Jockey Club into a Limited company some years ago he was appointed Chairman, which position he was holding at the time of his decease.

He was a member of the Gawler Lodge of Oddfellows M.U. and was also active and prominent member of the Masonic fraternity, being a P.M. of fidelity Lodge, a member of the Grand Lodge S.A., and at the time of his death was the W.M. of the Gawler Mark Lodge of Freemasons of which he was one of the foundation members and in which he displayed a very active interest. His Masonic brethren deeply deplore their loss and will miss his active participation in their gatherings, which to him as the worthy son of a worthy mason were something more than an empty profession.

"Robert Henry Barnet, born at Gawler, October 25, 1868, and is the third son of the late Mr. Wm. Barnet. Educated at Mr. L.S.Burton's school. Apprenticed "Bunyip" printing office in 1881, and four years later appointed foreman. On the death of his father in 1895 he undertook the duties of manager. Was captain of Central Tennis Club for nearly 20 years; Secretary of Prince Albert Cricket Club for several years.: captain of second twenty Albion footballers : captain of Central Football Club at the inauguration of Gawler Football Association : delegate of Gawler Albion Football Club to the S.A. Football Association and an active players : Vice President of Agricultural Society in 1894, 1895 and 1907 : member of Athenian Christy Minstrels and Gawler Amateur Comedy and Dramatic Company which performed in aid of all Institutes within 16 miles of Gawler. Is Treasurer of Gawler Jockey Club (eight years) and arranger for Gawler Show Wine Committee (14 years)."

[E.H.C.] p121 "The "Bunyip" printing establishment was founded by the late Mr. Wm. Barnet in 1857, and has continued in existence ever since. Six years afterwards the "BUNYIP" first saw the light.... The founder died in 1895, and the concern has been carried on since by Mr. Barnet's widow, his son (Mr. R.H.Barnet) acting in the capacity of manager...." 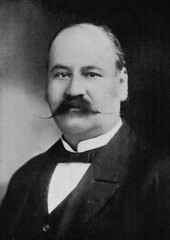 Do you remember Barnet Robert Henry ? Then Join up and add your memory here.