Mr. William Barnet jr. was the third son of the late Mr. William Barnet senior who died in Gawler East in 1889 at the advanced age of 90. William junior was born in Kinross, Kinrosshire, Scotland, in 1834, and was was in his 61st year when he died in his Gawler East home in February of 1895. Mr.W. Barnet was brought up to the occupation of a Printer and served his apprenticeship as a compositor in his native town, where his elder brother, Mr. George Barnet, ran the Kinrosshire Advertiser - The two brothers had gained valuable experience in a large printing establishment in Edinburgh previously.

Mr.and Mrs. Barnet senior, two sons and one daughter, (who afterwards became Mrs.James Fotheringham), left Scotland and came to South Australia in 1852, and soon afterwards settled on the Murray River north of Blanchetown at Murpka run, now called Murbco. William Barnet jr. arrived in South Australia in November of 1855 and joined his Parents on the river- The vessel which brought him was the “Theodore”, which also had on board the first locomotive and rails for the South Australian Government- These were used in the construction and working of the line between Adelaide and Port Adelaide- It is noteworthy that the town which he ultimately settled in, turned out the first locomotive made in S.A.

In 1857 he came to Gawler, and as as there seemed to be a good opening he decided to start a printing establishment. It was in this year that the “Colonial Athens” was first connected with the city by telegraph; the northern railway was opened as far as Gawler, the Gawler Institute was founded; the town was formed into a municipality; and the first banking establishment was opened. The year that The Bunyip printing establishment was instituted was therefore one of the most eventful in the town's history. Several interesting publications were issued from his office before The Bunyip was first published in September, 1863. amongst these was "a general and commercial directory for Gawler and surrounding districts”, comprising correct lists of the corporation, churches and chapels, public buildings and societies in Gawler; also, the district councils of Barossa East, and West, Mudla Wirra, Munno Para East, and West, Mount Crawford etc. , to which is added a short sketch of the rise and progress of Gawler and a mass of local information, with an almanac for 1861. The sketch of The rise and progress of Gawler was from the able pen of Dr. Nott, and is a concise, authentic and very readable account of the history of the town from the laying out of the Gawler- special survey in 1839 until the stirring times of 1860.

The Bunyip was first issued as the organ of the renowned Gawler Humbug Society in September, 1863. The pungency of its articles compelled attention, and even the London weekly Times referred to the paper in terms of high eulogy. The first edition contained the following paragraph: "We desire it to be the vehicle for fun, humour and satire. When our fun degenerates into license, our humour into vulgarity, or our satire into scurrility, we trust our readers will give us the plainest indication they can of their disapproval by ceasing to buy our paper.” But not withstanding this declaration, a portion of the contents of the first issue was construed into something offensive and a libel action resulted, in which William Barnet had a verdict of one shilling returned against him, plaintiff being Dr Popham.

William had a true journalistic instinct well developed, and while he was not insensible to the blessings of a good credit balance and a well nourished cash box, he experienced keener pleasure and pride when he received evidences of the high opinion in which The Bunyip was held. They were not indulging in loose boasting when it was said that no provincial town in the colony had its local affairs so fully and faithfully recorded as Gawler did in the late 1800s.

As might be expected from his long residence in the town and his close intimacy with its affairs, the late gentleman was a great authority on various events which had marked the history of Gawler an historical compendium of his era. This in itself was a great advantage in the conduct of the paper, although he held aloof from all public offices, he was in some respects as much a public man as anyone, and his assistance in the promotion of any proposal was always regarded as a valuable element. In the earlier years of his residence in Gawler he was able to take a more active interest in the societies he was connected with than in later years, and his name appears many times in the history of Gawler from 1861 through and past the eighties In the early 1860s William joined the Gawler Rifles No.1, captained by Mr. F.F. Turner, Mr.T.O.Jones was sergeant, William Barnet was subsequently appointed Lieutenant, In the same year he was honorary secretary of the Lodge of Fidelity, Freemasons, William had joined the lodge in September in 1858, his good friend Mr Burton joining a few months later. It was during Mr. Barnet's term of office that the Masons took an interesting part in a ceremony at St.Georges church, viz, the fixing of the keystone of the arch.

It was the custom in those days to have an assessor for each Ward of the municipality and William was appointed in that capacity for South Ward, He occupied positions on numerous committees and was ever anxious for the prosperity and good name of the town.

Mr. Barnet may not have left a large fortune behind, but to the Town and neighbourhood he has bequeathed a valuable legacy in the form of an organ of public information and instruction established on lines which if followed out cannot fail to exert an important and beneficial influence on the town and district. As the town grows in importance, so, doubtless, will the influence of this journal. But just as the glorious view of the landscape from the top of a tower is dependent on the stability of its foundations, so also the future success and influence of this Paper will be due in great measure to the foundations so well and faithfully laid by its recently departed founder. 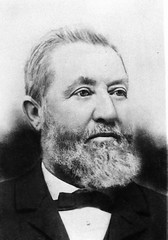 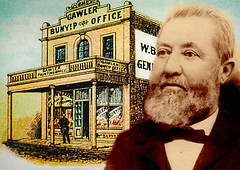 Do you remember Barnet William Jnr ? Then Join up and add your memory here.