On Sunday last passed peacefully away Mr. William Barnet, senior. It cannot be said that he died after a long illness, although for the last eighteen months he was confined 'to his bed. He suffered no pain, nor expressed any inconvenience, but faded gradually away, his senses keeping clear.'

Mr. Barnet was born February 4, 1800, in Damhead, Perthshire, Scotland, but subsequently removed to Kinross, where he carried on business as a manufacturer for some years. Subsequently in 1853 desiring scope for his growing family he came to South Australia. At that time the Victorian diggings were attracting much attention, and Mr. Barnet proceeded there to try his fortune. Like a good many more he was unsuccessful, and returned to South Australia, where, on the Murray and in the neighborhood of Salisbury, he engaged in pastoral and agricultural pursuits.

After some years he relinquished business, and he and his wife resided with their daughter, Mrs. James Fotheringham, at Kinross Villa, Gawler. Mr. Barnet was of an ingenious turn of mind, and while engaged in agricultural pursuits made some valuable Improvements in the stripper, some of which are now in use. He was for a few years a member of the Yatala District Council, but otherwise mixed but little in politics or public business. His kindly, genial habits endeared him to a large circle of acquaintances, by whom he will be truly mourned. He was married on the 7th June 1824, consequently had been married just 65 years and 6 months exactly. Mrs. Barnet is in her 93rd year and still hardy and strong, though she feels her loss keenly.

Mr. Barnet leaves behind him besides his widow three sons and one daughter, the eldest son, George, started the first news paper in the county of Kinross, the Kinross Shire Advertiser ; the paper still flourishes under his proprietorship. The second son, Mr. William Barnet, of this town, established in Gawler the first printing press out of Adelaide, and also started the first paper, the Bunyip. The other son is Mr. E. Barnet. The daughter is Mrs. James Fotheringham, of Kinross Villa of this town, with whom deceased has been living, and at whose residence he died. The funeral took place on Monday, and Mr. Barnet was buried in the family ground in the Willaston cemetery. There was a large attendance, and the service was conducted in an impressive manner by the Rev. J. Gordon. All the shops were close shut during the passing of the funeral cortege, many of them having had the shutters up all day. 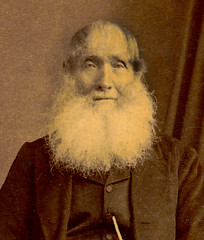 Do you remember Barnet William Snr ? Then Join up and add your memory here.