Birmingham holds a Master of Business Administration from the Adelaide Graduate School of Business, University of Adelaide. The Hon. Senator Simon Birmingham has been a Liberal Party member since 2007. From 2013, Birmingham served as Parliamentary Secretary to the Minister for the Environment, then as Assistant Minister for Education and Training in the Tony Abbot led Liberal Government. 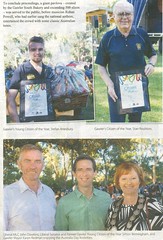 Do you remember Birmingham Senator Simon ? Then Join up and add your memory here.