Eileen and Malcolm Boswell began their married life at Gawler River in 1952 which triggered a multi-generational association with the Gumnuts Netball Club (originating as Gumnuts Basketball Club). Their home was on Hillier Road near “Snow” and Phyllis Lethbridge and they often watched their friends Doreen Elliott and Phyl train for Gumnuts at the Lethbridge home. There is conjecture about the exact year in which Gumnuts first began, some say it was 1946, although Nancy Lucas (nee Willison) is pretty certain it was in 1947 and she played in the first team. Marriages and pregnancies led to the club’s recess until it re-formed in 1955 and Gumnuts continues to this day.

Gumnuts located their official training at the Gawler Blocks Primary School, which is now Evanston Gardens Primary School and Eileen continued to observe the club in action over the years once her children began attending the school and through her active involvement in the school’s Welfare Club. Roslind Boswell (now Wood) began her long connection with Gumnuts in 1965 at the age of 10, starting off by training with the girls, then joining the youngest team. Ros was called unexpectedly one Saturday morning and she remembers playing Defence Wing (now Wing Defence) in that first match, wearing her regular clothes as she did not have a uniform. Nancy Lucas was Ros’ first coach. Lyndall (now Bain) started similarly in 1966 at the age of 9, eager to participate in the game of “basketball”. By the time Virginia (now Miller) joined Gumnuts in 1969 there were more teams and the grades were more age-appropriate. As teenagers, Ros and Lyndall played in the same team, with Ros as Back Goalie (now Goal Shooter) and Lyndall as Front Goalie (now Goal Attack). They both vividly remember wearing box-pleated uniforms that required ironing, tied at the waist by a cord “girdle”, black flat-soled basketball shoes, long white socks and playing with leather basketballs which were very heavy when wet. When younger sister, Virginia, began playing she was one of the tall ones and usually played Back Defence (now Goal Keeper) - rules about having to change positions as a junior player did not exist in those days.

In addition to several premierships, one of the highlights over the years was when their teams won the Goal-throwing Cup, now known as the Hallam Cup, on two occasions. Competition was always tough and although it was common to reach the finals, premierships were harder to achieve. Ros remembers that Gumnuts highest winning margin over her years of playing with the Club was 106 to 2 goals against Road Knights Club.

Eileen, Ros, Lyndall and Virginia enjoyed netball immensely and while Eileen didn’t play, she held the various roles of President, Patron, Committee member and team “chaperone” over the decades. Being part of a netball club for the girls was always about more than just playing, with them taking on various roles as coach, umpire and committee leadership positions. In the early days, each player would hand sixpence to the umpire at the start of the game, as their fingernails were checked, in order to pay for her/his services. There was only one umpire per match. When decimal currency came into existence in 1966, this changed to a 5-cent fee and ultimately the fee became included in the subscriptions and players no longer needed to worry about having change at the ready.

Box-pleated tunics eventually changed to straight cotton shifts in the 1970’s, followed by A-line wrap-around skirts, pleated wrap-around skirts and T-shirt (crew neck, followed by collars), body-suits in the early 2000’s and a brand new “shift” uniform in 2016. The original colours of brown and bottle-green were chosen by the first Gumnuts team and after protracted debate, they were changed to the popular colours of black, teal, white and purple in the early 2000’s.

Trading tables occurred regularly throughout the 1970’s and 80’s to raise much-needed funds for club facilities, equipment and trophies. Sugar consumption didn’t seem to be an issue as dozens of toffees, little cakes, marshmallows and coconut-ice were made and sold by Eileen and many other mothers including Rose Coles (mother of Nola and Julie), Phyl Paine (mother of Judith) and Joan Boyd (mother of Christine and Elizabeth), who seemed to provide an endless supply of such sweets, much to the delight of players and spectators. Gumnuts were renowned for excellent trading tables.

In addition to playing in Gawler, Ros and Lyndall remember playing for Gumnuts at Argana Park, Elizabeth, in the summer season and at Salisbury in the game of League Netball, which is an adaptation of netball.

In 1977 the team coached by Lyndall at the time formed a Guard-of-Hour at her wedding to James Bain on September 24. The wedding party included Ros, Virginia and Susan Knott (nee Fromm) – all Gumnuts players. James has attended countless matches since the 1970’s, he coached junior teams when their daughter Elise started playing and he attends the annual Club break-ups with family and life-long friends. Life Members Colleen Mann, Sue Knott, Audrey Clarke, Janice Roberts, Julie Fox, Sue London and Marian Edwards are several of the regular attenders at the break-up events. Throughout Gumnuts’ history, the Club has valued its players, families and officials and this has ensured that once players begin with the Club, they often remain for many years and the Club’s long list of life-members and long-serving committee members are testament to this.

Gumnuts has been directly aligned to the Gawler Blocks (now Evanston Gardens) Progress Association, with Ros, Lyndall, Eileen and Malcolm Boswell taking on roles in the Association over the years. The courts on Angle Vale Road were used for decades for Club practice, as was a modified court at the Primary School and the Evanston Gardens hall was home for Club events, meetings and celebrations, including the 30th Anniversary event in 1985. Life Membership and Service Awards were introduced by the Club at the 30th Anniversary and some of the first recipients included Stan Coles (father of Nola and Julie), Eileen Boswell, Regina Simmons, Audrey Clarke (mother of Lynette), Ros and Lyndall. Virginia achieved life membership several years later and Malcolm was awarded honorary life membership in 2012.

Pregnancy only briefly interrupted playing netball and each of the daughters of Ros, Lyndall and Virginia also became players with Gumnuts. Ros’ daughters Shana Wood (now Hinderwell) and Heidi Wood (now Gogoll) both attained life membership and went on to play at State-League Reserves level for Tango Netball Club. Lyndall’s daughter Elise Bain (now Nelson) also achieved life membership and along with her friends, who all started playing for Gumnuts at the Gawler Recreation Centre from the age of six, helped in the Club’s strong growth from the 1990’s. Virginia’s daughters Nicole and Tanya Miller played for quite a few years before taking up other artistic pursuits.

Gumnuts Netball Club has a long tradition of celebrating each season’s achievements and the Club held a two-day program to celebrate its 50th anniversary on July 2 and 3 in 2005. Officials at this occasion included the Hon. John Dawkins MLC (whose daughter Leah had played for Gumnuts); the Hon. Malcolm Buckby, Member for Light; Mayor Tony Piccolo; Deputy Mayor Helena Dawkins; Val Clark as Past President of the Gawler and Districts Netball Association; and Jane Woodlands who represented the SA Netball Association and was then assistant coach of the Adelaide Thunderbirds.

With Gumnuts being one of the longest existing and largest clubs in the Gawler and Districts Netball Association, the Boswell family continues to attend the end-of-season events after each winter season and they are impressed by the Club’s ongoing success, encouragement of young and new players, and recognition of talent, teamwork and contributions to the Club at all levels. Success has not been accidental, but has resulted from outstanding commitment by many people, including over the more recent decades by individuals and families including those of: Sue London; Lyn Goodwin; Julie Tester; Sue Marks; Duncan Cruse; and many others. There are too many people to list, nevertheless the Boswell family values all that they have done for the Gumnuts Netball Club and the significant difference they have made for individuals, families and our community as a result.

Click Here to view photos of the Gumnuts Netball Club 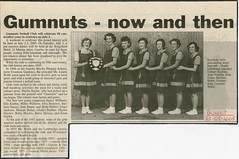 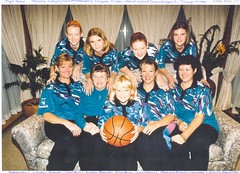 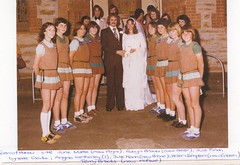 Do you remember Boswell Family and Gumnuts Netball Club ? Then Join up and add your memory here.