An ex-Mayor of Gawler, is the eldest son of the late Mr James and Jane Bright nee Cox, of the town, where George was born 27 June 1859, and educated at the late Mr L S Burton’s school (St George’s Grammar School). In December 1898, he first entered the Gawler Town Council, being returned to fill an extra-ordinary vacancy, as representative for South Ward, and served as Councillor for four years. In December 1902, he was elected unopposed to the office of Mayor, and re-elected the following year. Mr Bright received an appointment as Justice of the Peace in 1903 and was a member of the Fire Brigades Board for two years (1903-4). He was a staunch Rechabite and in addition to having passed through the chairs of the local Tent, at the last District Council was elected to a position upon the Board of District Trustees and has been a P.D.C.R. since March 1907. He is also Chairman of the Temperance Vigilance Committee of the town. In his younger days was a prominent cricketer and footballer, Mr Bright now holds the position of Chairman of the Cricketing Association and is similarly connected with the tennis clubs of Gawler. He is a member of St George’s Church in which he holds the offices of People’s Warden and President of the Band of Hope. He was a member of the board of management of the Hutchinson hospital becoming chairman and later a trustee of the Hutchinson estate governing the hospital, following Mr C G Rebbeck. He was closely, connected with the Gawler Institute being a trustee and official seal holder and took an active part on behalf of the Institute subscribers. In combating the erection of the memorial Institute.

Mr Bright married 21 February 1882, at the residence of Mr James Symes, Gawler River. Mary Matilda, daughter of Mr James and Lucina Symes nee Higgins, a farmer of Gawler River and an old pioneer of South Australia, who arrived by the ship “William Mitchell” in 1838 and was for some years in business in Hindley Street, Adelaide, in the bootmaking trade. Mary Matilda Symes born 3 Jan 1861 and died 26 October 1949 Gawler.

After completing his education, he was apprenticed to the wheelwright’s trade under Mr John Jones. He remained many years in his trade but was sufficiently far-seeing to anticipate the property boom and opened a land and estate agency, developing a lucrative business. His philanthropy was extensive, yet in charity he acted on the principle of not letting the one hand know what the other hand was doing. George died at the Hutchinson hospital, Gawler on 30 March 1928.

Both George and his wife Mary were laid to rest in The St George’s Anglican Cemetery, Gawler East. There were three children:

BRIGHT Joyce Symes (16 September 1884 Summertown and died 2 October 1972 at Fullarton, late Kingswood at the age of 88 years, she was unmarried) 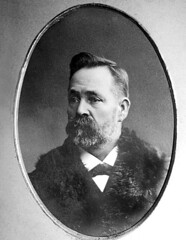 Do you remember Bright (Mayor) George ? Then Join up and add your memory here.