Ann and Brian have been associated with Gawler since Brian was appointed Principal of Rosedale Primary School in 1967. In 1972 they moved to Gawler, living in an Education Department house at Gawler West before purchasing their own home on Thomas Terrace in 1975.

Ann was born at Auburn, SA and attended Undayla Primary School before the family moved to the South East where she attended OB Flat Primary School and Mount Gambier High School where her talents for art and craft were recognised and encouraged. Some of her art work was included in the presentation made to the Queen when she visited Mount Gambier in 1954. She played hockey and tennis and had the reputation of being a fierce competitor.

After finishing her Secondary Education, Ann attended Adelaide Teachers College and the SA School of Art, graduating as a Secondary Art Teacher in 1957. She commenced teaching at Nuriootpa High School in 1958.

Brian was born at Clare and attended Clare Primary and High Schools. In 1956, he commenced a two year Primary Teaching course at Adelaide Teachers College. He was a foundation student of Wattle Park Teachers College and graduated in 1957. He was appointed Head Teacher of Telowie Creek Primary School in 1958.

Ann and Brian were married on January 7th 1961 and established their first home at Stockwell where Brian was Head Teacher of the local primary school. Ann continued teaching at Nuriootpa High on a part-time basis. Jenny was born in May 1962 and Steve in October 1964. Ann played tennis for Stockwell and Brian served several terms as President of the local Progress Association and the Stockwell Institute.

After six years at Stockwell, Brian was transferred to Rosedale where he spent five years. Jenny and Steve commenced their schooling at Rosedale. With both children at school, Ann took up oil painting again and became involved in the Sheaoak Log Agricultural Bureau and the Rosedale Primary School Mothers’ Club. She also enjoyed playing tennis at Rosedale, whilst Brian played cricket for Freeling.

Brian’s next appointment was to the Open Space Unit at Evanston Primary School, followed by a promotion to Principal at Sandy Creek Primary. Ann continued playing tennis for Rosedale, supported the Evanston Primary School Welfare Club and enjoyed a long and happy association with the Gawler Art Society. Brian continued to play cricket for Freeling and later Sandy Creek and joined the Rotary Club of Gawler in 1975. During these years, the family travelled extensively throughout Australia and South East Asia.

Brian’s next move was to the Elizabeth Regional Office of the Education Department and from there to Mount Pleasant and Mintaro. At Mintaro, the whole family became involved in the local community through community and sporting organisations. Jenny and Steve completed their secondary schooling at Clare High.

Brian’s last two appointments were to Angle Vale and Gawler East. The Gawler East community was growing rapidly and Brian saw Gawler East Primary grow from 320 students to over 760, necessitating the building of the new GEPS. During this time, Ann was closely involved with the Gawler Art Society, Meals on Wheels and Probus as well as helping Brian with his Rotary work. She was host “Mum” to several Rotary Exchange Students and several students from Germany’s Karlsruhe University who were based at GEPS as part of their teacher training. As a result of these contacts, they have travelled widely and have an extensive network of Rotary friends.

Shortly after Brian’s retirement in 1995, Jenny died and Ann and Brian spent the next eleven years helping Keith raise her four children.

In 2010, Ann was diagnosed with the pre-leukaemia condition myelodysplastic syndrome which mutated to acute myeloid leukaemia in 2012. Despite putting up a brave fight and receiving treatment from some of the world’s foremost leukaemia experts, she succumbed to this terrible disease on October 14th 2015. During her last months, Ann helped Brian organise Light the Night Gawler to raise funds for the Leukaemia Foundation. Gawler’s first Light the Night was held on October 21st and was a fitting tribute to Ann. Light the Night has become an annual event in Gawler, with the 2017 event raising over $9,000.

Brian still lives in their Thomas Terrace home and has continued his community activities. 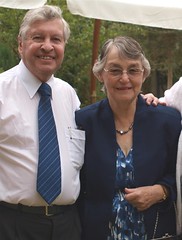 Memories of Burt Brian and Ann

Do you remember Burt Brian and Ann ? Then Join up and add your memory here.