This early symmetrical cottage, with later projecting wing, is set high above the road on a once generous allotment, later subdivided. It is constructed of overpainted stone rubble with rendered and face brick quoins. The original cottage section displays mid Victorian-era detailing, while detailing to the later bay is of the Federation-era. Windows are timberframed, double-hung multipaned sashes and the entrance door is panelled timber with glazed fanlight. The verandah is straight and clad with corrugated metal, supported on timber posts and extends to the south with deck. STATEMENT OF HERITAGE VALUE:

Likely built sometime in the late 1870s, this dwelling is located on a prominent, elevated allotment overlooking Calton Road. The large setback from the street reflects the early intention of the Gawler survey, divided as generous allotments for prominent figures as part of the early subdivision of Gawler’s East. It is also an example of an original cottage with a later projecting bay, which were distinctively added to original dwellings as the prosperity of Gawler’s industries generated growth in the local economy in the late nineteenth century.

Occupied initially by a fellmonger Samuel Parnell, it demonstrates the typical early dwellings that were built in Gawler East for early residents of Gawler, mainly proprietors of local businesses. Fabric and form of the dwelling remain largely intact and continue to demonstrate its prominence on Calton Road, despite the various subdivision of the land which has reduced the original generous setting.

The Town of Gawler was first surveyed and planned by Light, Finnis & Co in 1839 as part of the Gawler Special Survey sponsored by a syndicate of wealthy investors including Henry Dundas Murray, John Reid and others. The original town plan devised by Light and laid out by William Jacob comprised 240 acres, made up of 100 acres of allotments (as 200 half-acre allotments) and 140 acres of streets, parklands, city squares, churches, cemeteries and other public places. Each of the original Special Survey investors was allocated township blocks along with their country acres, proportionate to the extent of their investment. Calton Street formed part of the original 1839 subdivision of Gawler Town. William Paxton, of Burra Mines fortune, held large portions of land in Gawler in the mid-1840s.

In 1849 the area between Lyndoch Road and the South Para River and between East Terrace and High Street was surveyed and subdivided for sale by Paxton. An undated historic plan indicates that the subject town allotment was likely first purchased by Henry Calton, Colonist and prominent local businessman as part of a much larger large holding which extended from Daly Street, along Calton Road and Murray Streets, taking in the site of his ‘Old Spot Hotel’. The title was transferred to Samuel Parnell, fellmonger, in 1874 and then passed to Grace Ann Scown in 1891 as sole executor of the estate named in the will. The date of construction of the dwelling is unknown, however the allotment was subdivided in 2003. 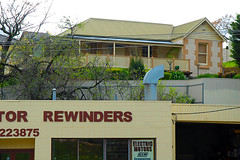 Do you remember Calton Road 2 ? Then Join up and add your memory here.