This two-storey, double-fronted dwelling is located on an elevated site and is set well back from the street. It is constructed of random coursed sandstone, tuck-pointed, with red brick quoins and dressings. The hipped roof is clad with overpainted corrugated galvanised iron and chimneys are of red brick, with dentilled caps. The windows are timber-framed, doublehung sashes, multipaned to the ground level. The entrance door has a red brick arched head with fanlight, and a second entrance to the west end of the façade features French doors. The entrance is accessed via terraced slate steps from the street. The front boundary is defined by a dry stone wall with a portion of cast iron fence panel.

Likely built sometime in the mid-to-late 1870s for David Thomas, grocer, this dwelling is located on a prominent, elevated allotment overlooking Calton Road, and adjacent to Murray Street. The large setback from the street reflects the early intention of the Gawler survey, divided as generous allotments. Occupied initially by a local grocer, it demonstrates the typical early dwellings that were built for the first residents of Gawler, often proprietors of businesses in the local area. It is an uncommon typology, being double-storey in form, with an uncommon asymmetrical configuration of openings on the façade. The quality construction is an intact example of a mid-to-late Victorian era dwelling featuring distinctive Gawler-style detailing, stone, brickwork and dressings which suggest it was a quality build of its time. A number of notable local personalities, including John James, Old Spot Hotel proprietor, and Robert King Thomason, founder of Eagle Foundry have a significant association.

The Town of Gawler was first surveyed and planned by Light, Finnis & Co in 1839 as part of the Gawler Special Survey sponsored by a syndicate of wealthy investors including Henry Dundas Murray, John Reid and others. The original town plan devised by Light and laid out by William Jacob comprised 240 acres, made up of 100 acres of allotments (as 200 half-acre allotments) and 1 40 acres of streets, parklands, city squares, churches, cemeteries and other public places. Each of the original Special Survey investors was allocated township blocks along with their country acres, proportionate to the extent of their investment. Calton Street formed part of the original 1839 subdivision of Gawler Town.

William Paxton, of Burra Mines fortune, held large portions of land in Gawler in the mid- 1840s. In 1 849 the area between Lyndoch Road and the South Para River and between East Terrace and High Street was surveyed and subdivided for sale by Paxton. An undated historic plan indicates that the subject town allotment was likely first purchased by Henry Calton, Colonist and prominent local businessman as part of a much larger large holding which extended from Daly Street, along Calton Road and Murray Streets, taking in the site of his ‘Old Spot Hotel’. 1859 Rate books indicate that George Wyld, Adelaide businessman, owned Lot 295 as part of a much larger holding of adjoining lots including 238, 239, 240 and 394. In 1868 Joseph Parker owned allotment 295. The original Allotment 295 remained vacant and undivided until 1870 when titles indicate there was then separate ownership of two part lots (now 4 and 6 Calton Road). The subject lot was transferred at this time to David Thomas, a grocer, in 1870, and again soon after to John James in 1 875. John James was proprietor of the Old Spot Hotel between 1870 and 1878. Following James’ death in 1897, the property was transferred to Bernard Magarey, Labourer (1902), Alice Caroline Moore, wife of Frederick Moore, Grocer (1903), Henry Thomas, Retired Farmer (1907) to Robert King Thomson, Iron Founder and proprietor of the Eagle Foundry (1913). The exact date of construction of the dwelling is unknown, however rate books record a residence by 1875. 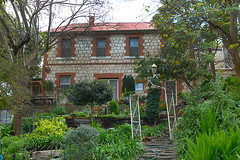 Do you remember Calton Road 4 ? Then Join up and add your memory here.