Gawler has some excellent examples of the cast iron that was produced in the various foundries in Gawler. They consist of cast urns, cast fence panels, cast decorative verandah edging, cast verandah post supports, cast gates and knobs. Samples are still visible at Martindale in Duffield Street, properties on Lyndoch Road, East Terrace, Cowan Street and most of the older houses in the Church Hill area. The gates and fence section at Martindale still shows the mark of the manufacturer, James Martin of Phoenix Foundry on Calton Road, Gawler East. The fence at 10 Lyndoch Road still shows the mark of the manufacturer, David Thomson of Eagle Foundry in King Street, Gawler.

The cast iron urns pictured are quite common in Gawler, many of the old houses have them. The hall at the Yaldara Winery has a pair at the entrance but this hall was only built in the 1960s and they would have been salvaged from elsewhere. This patterned urn does come in three sizes with the smaller two not having handles. Only one that I have found, has a maker's mark and this one is in my shed. (Rob Richter)

This urn (original) is dated at between 1873 and 1880 and is in such condition that it is not and cannot be displayed, being very delicate. It came from a fishpond as a centre fountain from an original Fred May homestead. The fishpond still exists and is in use with a copy terracotta urn in place. It is the same as the original, albeit without the ornate handles. It seems that it may have been Martin’s Foundry that copied the urn. Many houses owned by the Martin family had these ornaments. Fred May worked at Martin’s at the same time that Rabjohn had the foundry in Hamilton, ie 1873 - 1885, probably at the time the urn arrived from Canada. No-one, it seems, wanted the glory of being sued. Not all is lost in the mists of time.

As with a lot of ornate cast iron, the “masters” were very often pieces that were imported by individuals, then borrowed for a couple of days by a particular foundry for copying. Such is the case of the “Four Seasons” garden seat and the “Zodiac” table produced by Thompson’s Eagle Foundry. Samples of these items are on display at the Gawler National Trust Museum. It is a rarity to find cast iron with a purely Australian theme. 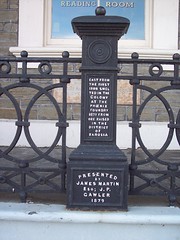 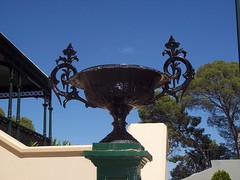 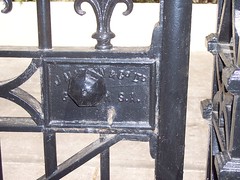 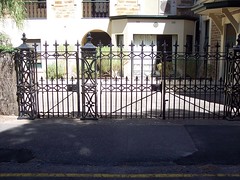 Side entrance gates to Martindale. 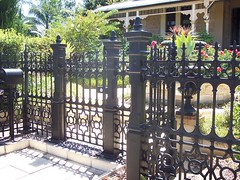 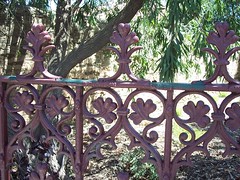 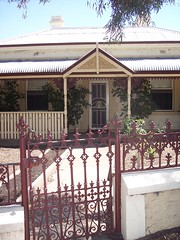 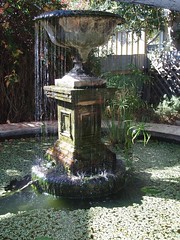 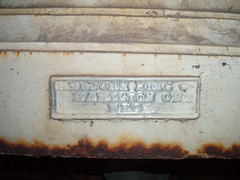 Memories of Cast Iron in Gawler

Do you remember Cast Iron in Gawler ? Then Join up and add your memory here.