The stone encompassing this memorial was demolished in 2002, when 156 Murray Street was developed as 'The Bed Shed'. The plaque itself was affixed to the wall next to 154 Murray Street.

In our report of the proceedings on the departure of the above expedition we find that we have made one or two mistakes, which, considering the short time we had for preparing it, we trust will be excused. We omitted to mention the name of the Colonial Secretary, as one of the supporters of the Chairman not having seen him from the place where we sat. The number of sheep taken by the expedition is 200, in place of 400. We take from a contemporary the following narrative of the progress of the expedition. The drays reached the Dry Creek on the afternoon of Saturday, the 10th instant, where the party halted, encamped for the night, "and remained in their camp until Monday morning. They then proceeded to the Little Para and spent the night in camp on its banks. On Tuesday they proceeded to Gawler Town, where the inhabitants received them with much kindness, and actively assisted them in fording the Gawler River, which, from the late rains, had become deep and rapid. Here they encamped for the night, amidst the hospitalities of the townsmen, and on Wednesday morning were invited by Mr Henry Calton to an excellent breakfast, and after-wards treated by him with as excellent a speech ; and they set out for Lyndoch Valley, on their way to Moorunde, amidst the hearty cheers of the population. In this place, one of their bullocks exhibited symptoms of exhaustion, and was left behind, a fresh one having been substituted for him. Captain Start, Mr Poole, and Dr Browne, who finally left Adelaide on Thursday, reached Gawler Town about midnight, rested at Calton's and started to overtake the drays at half-past ten on Friday morning. The Captain and the persons composing the party have been most cordially greeted wherever they appeared, they feel that the farewells of their countrymen were not confined to the object of the expedition but had relation to their individual comfort and well-being."

A HUNDRED YEARS SINCE HIS PARTY WENT THROUGH GAWLER

An interesting and historical ceremony was performed in Gawler on Saturday afternoon last when a cairn and plaque were unveiled by the Mayor (Mr. W. Antwis) on Centenary Place (old Market allotment) to commemorate the centenary of Sturt and party in their exploratory journey to discover the conditions of Central Australia. The Historical Collections Committee of the S.A. Geographical Society were the originators of this recognition of Sturt and his party, similar functions being arranged in the towns following his route. The Gawler Town Council worthily entered into co-operation and covered the expense of cairn and plaque. On Saturday the Gawler Town Band enlivened proceedings at the site prior to the ceremony and the schoolteachers had arranged for a good muster of children. There was also good representation of the general public. The official guests were the State Surveyor-General (Mr. Hambidge), President of the S.A. Geographical Society; the President (Capt. Parker, Clerk of Parliaments, S.A.), and the Secretary (Mr. Somerville) of the Historical Collections Committee; and two Mr Delands also associated with the Society and native-born of Gawler. Mr. Hermann Bischoff also appeared among the crowd and a lady whose father, Daniel John Adcock, in the early days had been an employee of The Bunyip, and had he lived would have reached 100 years last week. The Adcock family were pioneer settlers of Sandy Creek. Proceedings opened with the Natioual Anthem. The Mayor gave welcome to all visitors and introduced Mr. Hambidge then followed the address and afterwards the Mayor unveiled the memorial, Crs. Bray and Goodger returned civic thanks and the children brought the ceremony to a close by the singing of the Song of Australia. Among the guests were Hon. R. J. Rudall, M.L.C., Commissioner of Crown Lands; Hon A. J. Melrose, M.LC. and Mr. L. S. Duncan, M.P. Mr Hambidge gave an interesting and informative address on the travels of Sturt the following giving a fair resume of his remarks: Sturt was an inspiring leader, and although he was a strict disciplinarian he was just and considerate to his men The story of his three, exploring expeditions is one of bold decisions, fearlessly carried out in the face of danger, hardship -and discouragement. 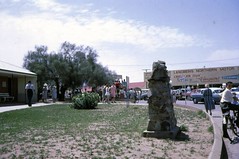 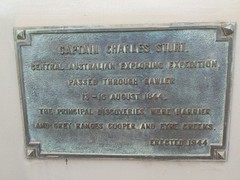 Do you remember Charles Sturt Memorial ? Then Join up and add your memory here.