LOOKING BACK ON CINEMAS IN GAWLER

According to Coombe's 'History of Gawler' the first appearance of the cinema in Gawler was February 1st, 1897.

Prior to 1930 an open air cinema run by a Mr. Jim McKenzie, the Lyric as it was so named, was situated at the rear of the then Top Shop on a block of the corner of Lyndoch Rd. and High St. When the Lyric closed Jim McKenzie then opened the Transfiguration Hall Gawler South.

Screenings also took place at the Gawler Institute which operated under several names i.e. The Strand, The Century etc.

At the bottom end of Murray St. there was a Cinema called the Astral. This was operated by a Mr. Laycock who was a coach painter and decorator. The interior of this cinema was tastefully decorated by Mr. Laycock. In later years it was used as a Dance Hall and was originally the site of the old white works. The theatre ran silent films and a Mr. Langbein was one of the musicians in the orchestra which accompanied the films. This building still stands and is at present occupied by the Energy Centre.

In 1934, Regal Amusements Ltd., a syndicate consisting of a Mr. Boyce and others built the Regal Theatre in Gawler. This group also built the Princess at Marryatville, and theatres at Prospect and Victor Harbour. "The Regal" was to become the only theatre in the town. This syndicate named their circuit National Theatres.

The cinema was built on land originally occupied by James Martin Foundry and what was the front foyer of the theatre (now converted to shops) was built over cellars belonging to the foundry complex. Limestone for the walls was carted by Ron Sanders from Loos Ostrich Farm.

The Regal Cinema was later taken over by several different owners including a Mr. Jack  ????, Mr. Lee Jones who sold it to Waterman’s. In Mr. Jones' day the theatre screened Wednesday, Saturday matinee and night. The usherette uniform was a red skirt, red waistcoat with Chinese style collar and gold buttons and blue jacket. When Waterman’s took over the theatre they re-decorated and put rough plaster cast on the interior foyer walls but no major alterations were done to the existing building through its life as a cinema. During Mr. Jones' time at the theatre some of the front of house staff included Muriel Sneesby (from Wasleys - cashier), Clarrie Causby and his wife Edie Causby, Jean Donaldson (nee Collins - usherette). It is said that a Shirley Temple film was so popular that patrons were turned away.

Waterman’s circuit renamed the theatre to Ozone as part of the Ozone circuit operated by Waterman’s. Later on Hoyts brought the Waterman’s circuit and it then became Hoyts Ozone Theatre. Hoyts increased the screening policy to six nights and a Saturday children's matinee and employed a full time manager, projectionist, cashier clerk and cleaner. In the mid-fifties Hoyts installed cinemascope and such titles as "The Robe", "River of No Return", "Ben Hur" etc. were screened. It is felt that this was the heyday of the cinema with a seating capacity of 619 patrons as well as ticket prices at 4 shillings and 6 pence for the Dress Circle. Tickets had to be obtained no later than Thursday for Saturday night as the theatre was filled almost every Saturday night. The screening policy was nightly at 7.30 p.m. with Monday-Tuesday double feature program; Wednesday night was Ranch Night; and Thursday-Saturday double feature program. Saturday matinee for children was at 1.30 p.m. with the ever popular Tom & Jerry cartoon and the Daring Adventures of Tom Mix, Batman and Robin etc. in serial form.

In its heyday and through to its demise the plant consisted of colder arcs driven by a Lincoln D.C. motor generator, Simplex heads, Western electric sound heads and amplifier. The projection equipment was mounted on universal bases. During summer on Saturday afternoons with the heat from the arc lamps and the sun on the projection room it was not unusual for the temperature in the projection room to reach 118 degrees Fahrenheit.

With the introduction of black and white television in the 1960’s the demise of the local cinema in Australia began. Falling attendance led to a restrictive screening policy to Wednesday night, Friday and Saturday nights, and Saturday matinee. This was accompanied by the removal of every second row of seats downstairs to reduce the seating capacity to below 500. As under the then state law a fireman did not have to be employed thus cutting costs. Eventually the manager Bob Plume reduced the screening policy further to Saturday matinee and night only in February 1962.

With further inroads being made by the introduction of colour T.V. closure began of many cinemas throughout the country. The Hoyts Ozone ceased business in Gawler on May 27th 1967.

Shortly after the introduction of black and white T.V. there was on occasions a brief revival. This was brought about by what was termed in the industry road show films which had a wide appeal and returned patrons to the cinema and included titles such as "Those Magnificent Men in Their Flying Machines", "Sound of Music", "Around the World in Eighty Days" etc. When these films were screened in Gawler once again the theatre burst into life. Screening policy was once again nightly for six days and Saturday matinee, and on one occasion even an intermediate session at 5.00 p.m. on the Saturday.

Several Gawler families had a long association with the cinema in the town. Brenton Rusby’s father who started at the open air Lyric cinema continued into the mid-fifties at the Astral and Regent/Ozone. At the Regal/Ozone, Brenton commenced as an assistant projectionist and remained with the cinema until a few months before its closure. Roy Bulloch, who took the place of his father before him, was fireman and then usher till the end. Mrs. Zucher managed the candy bar for many years until its closure. Fred Parnell, was also a fireman until the reduction in seating capacity. At one stage Brenton’s father was relief projectionist, and Brenton was assistant projectionist. Brenton’s, wife Coral was an usherette and his brother-in-law was an usher all in the same period. The managers were regularly circulated through the circuit, some being H. Chapman, S. Stevens, H. Eden, T. Harvey and B. Plume.

Many stories could be told about events in the cinema's life - the regular Saturday night couple with the box of Old Gold chocolates with the assorted cheap toffees inside. The other regular couple who refused to sit anywhere but in the same two seats on every occasion. The time when six oil fired heaters were installed around the walls of the auditorium. The first cold night the heaters were lit at 3.00 p.m. as instructed by the manufacturers. Temperature in the dress circle at 8.00 p.m. 90 degrees Fahrenheit. The candy bar sold a record number of cool drinks that night. The afternoon when a truck coming down Calton Hill careered through the side wall of the theatre ending up in the front stalls. Incidentally, the show still went on that night. For some reason, while the ladies toilet was situated in the foyer the men's toilet appeared to be an afterthought and was positioned behind the James Martin statue at the corner of Calton Hill. Many a visitor to the theatre was not amused when they enquired from the staff the whereabouts of the men's toilet, only to be told to go 'behind the James Martin statue'.

Nancy Clift was a cashier c1965 on Saturday afternoon and the evening sessions, and with a special movie it would be shown on Friday night as well. At the matinee the children that got in early were offered tickets for the two front rows for one shilling and three pence per seat.

The theatre was under the management of Bob Plume at that time, and Jim Baldock was still the fireman.

It was prophesied by the industry many years ago that the home would become the main centre of entertainment. Going to the cinema is no longer a regular event but in its time the local cinema played an important part. The hotels closed at six, which only left the Saturday night dance or stop home and listen to the radio. The cinema played an important part in entertainment, social life and relaxation. The younger generation no longer experiences the fun of Saturday afternoon at the pictures - "Adventures of Robin Hood", "Lassie" or "Tarzan" and I am sure that there are many in the older generation who look back fondly on their weekly visit to their local cinema.

The occupiers of the shops at the front of the Theatre building.

The shop on the corner of Calton Road was a hairdresser/tobacconist operated by Will Couche and later by Ron Wasley for many years. Alongside was a Newsagent/shop operated at one time by Max Graetz, followed by the premises occupied by Farmers Union. The steps and doors to the foyer of the theatre were next, and the shop after that was occupied by a boot and shoe repairer which subsequently occupied by a computer shop. Above the shops was the projectionists enclosure about which Brenton Rusby remarked on the extreme temperatures that had to be endured by the projectionists in the summer.

In 2012 this article was replicated in the publication the Cinema Record. Click here to see how it was presented with images.

For more photos of Cinemas of Gawler, click here

John Thorpe gave a very informative address to Gawler History Team on Gawler Cinemas and the video of that address is below. 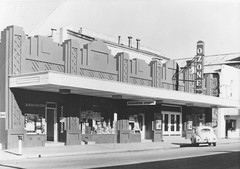 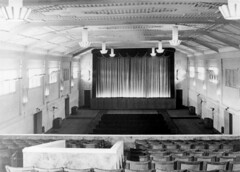 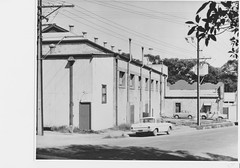 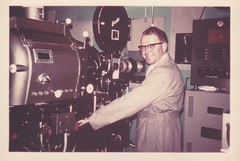 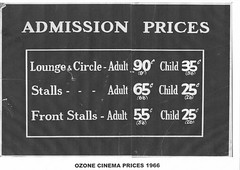 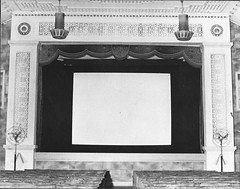 Memories of Cinemas of Gawler

Do you remember Cinemas of Gawler ? Then Join up and add your memory here.