John was born on 4th April 1929 at Dr. Dawes private hospital in High St. Gawler. When he was three months old his parents shifted to Adelaide so that his father would be closer to his work as a photographer/finger print expert with the SA Police Force where he was on call 24/7. John kept in contact with Gawler and as soon as school holidays came he would be back to Gawler and staying with his relatives. When he was about 6 years old, a Miss Sarah Marchant, fondly known as ‘Aunt Sarah’ would take him along Murray St. extolling the virtues of the historical buildings of the day. This meant little to John at the time but was to be the foundation of a lifelong interest.

In Oct.1951, John and Nancy Arnold were married in ‘St. Georges, Church of England’. Gawler. They were building a home at Ascot Ave. Vale Park in Adelaide and John found out that they were going to build a bridge over the River Torrens and form a main drag to the Eastern states. It so happened that the Clift family home, built by his grandfather in Bella St. in 1913 came up for sale, and John and Nancy were successful in purchasing it and John could not get out of Ascot Ave quickly enough.

Back in Gawler this started a 60 year, active involvement in Gawler’s history. John was fortunate in obtaining a position with the Electricity Trust of South Australia as a cashier/clerk in the Murray St. office on the corner of Murray St. and Walker place Gawler. John soon became known in the town and with the formation of a new Branch of the National Trust in Gawler, Mr. R.B.G. Gordon invited him to join on the committee. This lead to similar invitations to the Gawler Institute Committee, Service Clubs etc. This involved positions of Treasurer, Chairman and President at various times and Archivist of both organisations for a period of 30 years in each.

Upon retirement from these organisations John busied himself with his Gawler History and has supplied text and photographs for various authors such as Dr. Derek Whitelock, Stan Roulstan, (Glimpses of Gawler – Rotary, Gawler) Alison Painter. (Historian) etc. When Brian Thom was forming “The Gawler History Team” he invited John to join and this has been very rewarding with numerous stories posted on the Wiki site ‘Now and Then’ Gawler” and some 9042 digitalized photographs stored on the Flickr site.

Being retired –again- there is nothing John likes more than to spend time at his computer pondering his Gawler History and of course the 10 families he is recording on his genealogy. 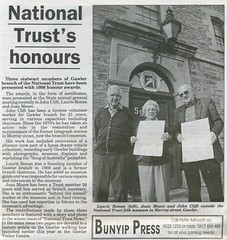 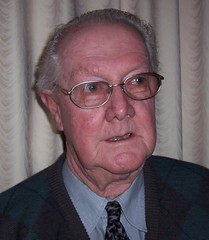 Do you remember Clift John ? Then Join up and add your memory here.