He married Ann Weld Fletcher on 23 June 1934. At St Peter's College Chapel. They had five children.

A short timeline of his life:

District of Munno Para East appointed Dr Covernton to the Board of Health as District Health Officer. Dr Covernton resigned in 1953, being replaced by Dr D.F. Hannon.

From The Bunyip newspaper regarding the Hutchinson Hospital

Vice President of the Gawler Institute.

August 15: The Bunyip newspaper announced that Dr Covernton was being sent to the Army’s Woodside Barracks where he would be under the instruction of Dr Major Lewis (another Gawler Doctor).

• Appointed Medical Superintendent by the Hutchison Hospital Board for the year.

• President of the Gawler Boys Club.

• Dr Covernton obtained his M.D. Degree at the Adelaide University and began a three-month post-graduate course.

• “During his term as medical director of the M.B.H.A. the infant mortality rate dropped in S.A. to its lowest ever of 15.49 deaths in every 1000 live births.”

• Dr Covernton retired as President of the Gawler Jockey Club, a position he held from 1945. (Tom Shanahan was president in 1950 while Covernton was overseas).

Racer and chairman of the Gawler Jockey Club. 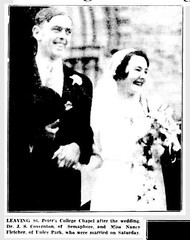 Do you remember Covernton Dr John Selby ? Then Join up and add your memory here.