Mrs. H. Creyghton celebrated her 90th birthday at her home, Second Street, Gawler South, on Friday, October 24th. She arrived in Australia by the Ocean Chief on April 7, 1864 and has resided in Gawler ever since.

Several friends and her family visited her during the day to wish her many happy returns. She still enjoys good health.

Harriet married twice. Wood was her maiden name, and on her first marriage she married a Wood. Creyghton was her name after her 2nd marriage

On Friday, March 11th, 1932, Harriet Creyghton, the grand old lady of the Church of the Transfiguration, passed to her rest at the age of 91 years, and her earthly remains were buried in the Willaston Cemetery on Passion Sunday: Mrs. Creyghton was born at Northampton, England, in 1842, and arrived in South Australia on the good ship "Ocean Chief," in April, 1864.

The rest of her long and useful life she spent at Gawler South. She was always a true and staunch member of the Church, and in the early days attended St. George's as often as a large family of little children would allow.

Later she attended the Church Services held in a barn near the present site of the Church of the Transfiguration, and subsequently became one of the first members and hardest workers of that Church. She has now finished her course here upon earth and has entered, we believe, into that fuller service of our Lord whom she loved and served so faithfully.

Our deepest sympathy, goes out, to those who are left to, mourn her loss. — R.I.P 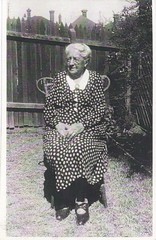 Do you remember Creyghton Harriet Wood ? Then Join up and add your memory here.