This single-storey, Victorian-era symmetrical cottage is elevated from the street level with a generous setting. It is constructed of overpainted stone rubble and the hipped roof is clad with corrugated metal. The windows are timber-framed, double-hung sashes to wither side of the central door with fanlight. Chimneys are of overpainted brick with corbelled caps. The concave verandah is clad with corrugated metal and supported on timber posts with timber detailed balustrade. Central splayed steps with rendered side walls and piers provide access to the verandah. A non-original rendered wall with aluminium palisade fencing defines the front boundary.

Constructed prior to 1 876, the substantial villa at 1 Daly Street, Gawler East, dates from Gawler’s boom period and demonstrates the uptake and development of the ‘Nob Hill’ area with premium residences for the town’s successful businessmen. The fine mid-Victorian era villa has generous proportions and elevated setting including substantial front setback. The property is associated with a number of notable figures including wheelwright and machinist, John Ivett and the ministry of the Gawler Baptist Church who adopted the property as their presbytery from 1877.

An undated historic plan indicates that the subject property was first held by George Wyld as part of a much larger large holding which extended along both sides of Daly Street as well as elsewhere in Gawler East. Wyld had purchased the land in 1857. The plan and the 1859 rate books indicate that Wyld, owned Lots 355 and 356 on the east side and lots 289, 290, 291, 292, 293, 294. Wyld mortgaged some of the land to Henry Ayers, however Wyld defaulted on the loan and it was sold in 1865. Allotment 356 was first listed under address as ‘Middle Road’ and it remained vacant for some time with subsequent assessments for vacant - then cultivated - land at least until 1868.

The property had been subdivided prior to the rate assessment of 1 876/7 with the subject lot facing Daly Street and the other with a front to East Terrace. John Ivett is listed as the owner and occupier of the subject lot, described as containing a residence which had been rated at a substantial figure. Ivett was a successful local wheelwright and machinist, owning a coachbuilding workshop, Swann and Ivett, in Tod Street from the mid-1860s. The title passed to the Baptist Church Trustees before the 1877-8 assessment and the residence was occupied by Reverend S Fairey. 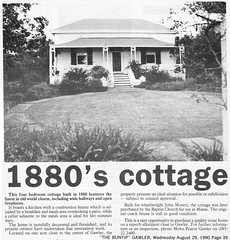 Do you remember Daly Street 1 ? Then Join up and add your memory here.