Insert a short and concise paragraph describing the important physical characteristics of the This is a large, asymmetrical, single-storey late-Victorian villa with projecting bays to the front and side. It is constructed of coursed tooled bluestone with red face brick dressings including hood mould and oriel gable vents to projecting bays. The hipped roof with gabled bays is clad with corrugated metal and features horn finials to gables. Windows are timberframed, double-hung sashes and are paired to the projecting bays, with a non-original awning to west, and door is panelled timber. Chimneys are overpainted face brick with moulded caps. The ogee return verandah is clad with corrugated metal and supported on turned timber posts with portions of cast-iron lace. The non-original ceramic tiled verandah is accessed via rendered brick splayed steps with end piers. A non-original timber picket fence defines the front boundary.

Constructed during the late 1890s, the substantial villa at 13 Daly Street, Gawler East, dates from Gawler’s boom period and demonstrates the uptake and development of the Gawler East area with premium residences for the town’s successful businessmen. The fine late Victorian era villa has generous proportions and quality detailing including the distinctive use of Gawler bluestone and local brickwork in the particularly ‘Gawler’ mode. The property is associated notable chemistry lecturer and prolific publisher, William Roatherham Jamieson.

An early historic plan of Gawler East and rate assessment books indicate that the subject property was not taken up immediately. In 1868 Allotments 351, 352 and 353 were owned by FF Turner and occupied by William Samuels as ‘cultivated land’. They continued to be rated as a group and described as ‘land’, ‘paddock’ or cultivated land’ until at least 1890.

The first available certificate of title dated 1899 indicates that the property was owned by William Roatherham Jamieson, Lecturer in Chemistry. Migrating to Australia in the early 1890s, Jamieson was employed as a chemistry teacher at the Queens School, North Adelaide and then at Roseworthy Agricultural College before later moving to Victoria. Jamieson married in 1899, the year he purchased the property and later published a number of teaching texts in chemistry. 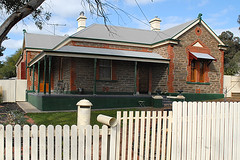 Do you remember Daly Street 13 ? Then Join up and add your memory here.