A single-storey double-fronted asymmetrical villa in the Federation era Edwardian style. The coursed face sandstone construction is ruled and features overpainted red face brick quoins and dressings. The façade features a central entrance with panelled timber front door and timber-framed leadlight-glazed surrounds. This is flanked by paired timber-framed doublehung sash windows. An additional bay to the north includes an additional paired window set. The façade is screened by a return bullnose verandah with turned timber posts and cast iron balustrade, frieze and brackets. The main entrance is highlighted by a gablet with timber fretwork over the verandah which is also mirrored by a gablet in the main roofline. The Dutch-gabled roof is finished with non-original corrugated Zincalume and features tall (overpainted) face brick chimneys with corbelled caps. The front boundary is defined by a non-original masonry and steel palisade fence. Alterations include rear additions and garage.

Common within Gawler East, the portion of land was part of a larger land package owned by Dr Barry Cotter, the primary physician in Gawler, and councillor for the south ward in 1857, an indication of the significance of the land holding. This same holding of land, later owned by David Hardy, was further subdivided and sold separately, in the establishment of the aptly named David Street. Likely built sometime in the early 1900s, this Federation-era villa is a quality example of local dwellings of its era. It is largely intact externally, and features high quality detailing in the stonework, dressings and cast iron embellishment. It demonstrates a later typology within an area of early residential development, harmonious due to the use of local materials.

The exact date of construction of the dwelling is unknown, however, rate books suggest the possible existence of a cottage on the subject land from as early as 1859. An article in the Bunyip states that in the sale of the series of allotments, David Hardy left a street in between lots 285 and 286, establishing nearby David Street in 1870. The subject land was transferred to James Clark, a fruiterer and later passed on to his wife, Margaret Ann Clark, following his death in 1903, and so on to successive family members, until it was transferred to Reginald Simeon Bosisto in 1915. The current allotment is a subdivided portion of the original lot. The dwelling precedes the 1959 subdivision. 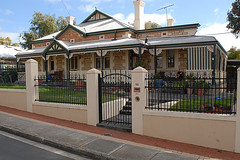 Do you remember Daly Street 22 ? Then Join up and add your memory here.