This single-storey, double-fronted cottage is elevated from street level with a generous garden setting. It is constructed of dressed, tooled sandstone with rendered dressings to the façade, and coursed bluestone with brick dressings to the side walls. The hipped roof is clad with corrugated galvanised iron. Windows are timber-framed, double-hung sashes to wither side of the central timber panelled door with leadlight glazed fanlight and sidelights.

Chimneys are of face brick with moulded brick caps. The splayed entrance steps are rendered with stone treads and capped piers to the ends. The hipped bullnose verandah is clad with overpainted corrugated galvanised iron and is supported on cast iron columns with Corinthian caps. The front boundary is defined by an original stone fence with arched red brick coping and a cast-iron pedestrian gate.

Constructed around 1903, the substantial late-Victorian era dwelling at 5 Daly Street, Gawler East, dates from the tail end of Gawler’s boom period and demonstrates the ongoing uptake and development of the ‘Nob Hill’ area with premium residences for the town’s successful businessmen. While simply composed, the generously proportioned cottage and extant stone walling distinguish the residence. Unusually for a residence of this scale in Gawler, embellishment includes bold cast iron verandah columns, a feature which likely relates to the profession of its owner, James ‘Jimmy’ Thomson. Thomson had joined the Eagle Foundry, a prominent Gawler business established by his father David Thomson in King Street in 1870.

An undated historic plan indicates that the subject property, Allotment 355, was first held by George Wyld as part of a much larger large holding which extended along both sides of Daly Street [noted in the rate assessment book as ‘Middle Road’] as well as elsewhere in Gawler East. Wyld had purchased the land in 1857. The plan and the 1859 rate books indicate that Wyld, owned Lots 355 and 356 on the east side and lots 289, 290, 291, 292, 293, 294. Wyld mortgaged some of the land to Henry Ayers, however Wyld defaulted on the loan and it was sold in 1865.

By 1868 Lot 355 had been purchased by one of Gawler’s first settlers, William Hope Popham, Medical Doctor. Together with the adjoining lot to the north, number 354, the land was rated as cultivated land, paddock or fenced land for over twenty years. In this time the property had transferred to Popham’s son, Francis William Home Popham following his death in 1871.

Between 1891 and 1903 the allotment was subdivided; the residence post-dates 1891 . In 1903 the property was transferred to James Jack Thomson, Moulder, of Gawler then his wife Isabel Jane Thomson in 1921. James ‘Jimmy’ Thomson had married Isobel in 1899 and joined the Eagle Foundry, a prominent Gawler business established by his father David Thomson in King Street. David Thomson died in 1903, leaving family to run the business. James Thomson was also a director of the Gawler Motor Car Manufacturers and Engineers Limited. 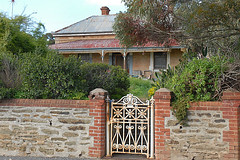 Do you remember Daly Street 5 ? Then Join up and add your memory here.