This single-storey, double-fronted asymmetrical bungalow demonstrates an unusual architectural form. It is constructed of dressed sandstone with red brick dressings on a rubble plinth. The Dutch-gable roof has louvred vent and is clad with corrugated metal. Gable ends are finished with strapped fibre cement and weatherboard, topped with horn finials. Windows are paired timber-framed, double-hung sashes with leaded sidelights. The timber panelled door is half-glazed with a leadlight panel and leaded sidelights. Chimneys are of face brick with rendered bands. The deep return verandah is enclosed beneath the main roof on squat pyramidal piers with a rendered wall with ruled ashlar finish and rendered coping. The front boundary is fenced with a non-original cast-aluminium palisade.

Constructed in 1924, the interwar-era bungalow at 6 Daly Street, Gawler, demonstrates the ongoing practice of infill development with quality residential design within the highly regarded ‘Nob Hill’ of Gawler East. Aesthetically, the bungalow is atypical for Gawler, yet its high level of integrity, detail and fine use of local stone and brickwork ensures that it harmoniously integrates with the surrounding nineteenth and early twentieth-century building stock.

An undated historic plan indicates that the subject property, Allotment 355, was first held by George Wyld as part of a much larger large holding which extended along both sides of Daly Street [noted in the rate assessment book as ‘Middle Road’] as well as elsewhere in Gawler East. It is understood that Wyld had purchased the land in 1857 however Wyld is not listed as an owner in rate books until 1859, at which time the property was mortgaged to Paxton.

The plan and the 1859 rate books indicate that Wyld, owned Lots 355 and 356 on the east side and lots 289, 290, 291, 292, 293, 294 on the west. Wyld mortgaged some of the land to Henry Ayers, however Wyld defaulted on the loan and it was sold in 1865, to Dr William Popham. Popham, a notable local identity then established an impressive home, ‘Craiglea’, fronting High Street and the subject Daly Street land flanked the rear. Much of the land remained undeveloped, including Part Lot 292, the subject property. William Popham mortgaged his entire property to his son, Francis William Hope Popham, in 1870; Francis took ownership from 1872. Francis’ wife, Ann, held title to the large holding after her husband transferred it to her in 1897. While much of it was sold in 1903, Ann retained some allotments, including the subject lot, and leased them to Dr Fooks, then Dr Alfred Stokes in 1910 and Dr Eric Lewis in 1915.

Ann Popham sold the street-frontage of Lots 291 and 292 (to one third their original depth) to Edward Gray, Fitter, in 1920. Gray and his wife may have been more than factory workers, purchasing a significant amount of land in the area and constructing the adjoining bungalow at No.8 Daly in 1925. Meanwhile Robert Ernest Button, Draper, and his wife Catherine Mabel purchased Part Lot 292 from Gray in 1924 and built the subject dwelling at No. 6.

Please <click here> to view a photo of 6 Daly Street. 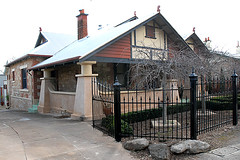 Do you remember Daly Street 6 ? Then Join up and add your memory here.