This substantial mid-Victorian era villa with part basement sublevel beneath the verandah, is situated in a very generous garden setting on a prominent elevated site overlooking the Gawler East escarpment. The residence is constructed of random coursed sandstone with red brick quoins and dressings, with hipped roof and projecting hipped south bay clad with overpainted corrugated galvanised iron. The north side elevation includes a double-height canted bay.

The timber verandah is enclosed by timber lattice panels and is supported on heavy rendered columns; each bay originally contained a decorative cast iron frieze, most are now missing. Entry to the verandah is via a substantial flight of central steps with rendered stone walls and end piers. The rear (east) elevation is divided into bays by the projecting rear wings including a large semi-detached gabled wing, possibly an early addition. Fronting the rear elevation is a covered walkway or verandah with parapeted roof. Distant from the villa is a detached outbuilding, likely a stable or small coach house.

Constructed in 1870 for Thomas Fotheringham, the substantial villa at 5 Duffield Street, Gawler East, dates from Gawler’s boom period and demonstrates the uptake and development of the ‘Nob Hill’ area with premium residences for the town’s successful businessmen and their families. The fine mid-Victorian era villa has generous proportions and elevated setting including substantial front setback and garden surrounds. The property is associated with a number of notable figures including Thomas Fotheringham, proprietor of Gawler’s hugely successful first brewing company, Fotheringham’s Brewery, as well as a wine and spirit business, the Exchange Hotel and South End Hotel.

After his death in 1861, it passed back to William Paxton, one of the original promoters of Gawler East. In 1 865, Paxton disposed of all his East Ward holding to individual buyers. TJ Markey bought the land comprising allotments 222, 223, 306 and 307 from Paxton, together with two half-acre blocks to the south, 221 and 308, extending from High Street to Duffield Street and built a workshop and sheds on the High Street portion. His machine shop was located opposite, on the other side of the road between High Street and Murray Street.

Thomas Fotheringham bought the land from Markey in 1870 and built Pine Lodge in 1872. Thomas came to Gawler in 1856 to join his older and younger brothers James and Robert, in Fotheringham’s Brewery on Julian Terrace (the first in Gawler) and in their wine and spirit business. He married Emily Morgan, a sister of Sir William Morgan and they had three children.

In 1866 Thomas took over the business and opened a spirit store. He owned the Exchange Hotel and property south of it and the South End Hotel and land to the south in Murray Street. Thomas died in 1894 at the age of 65 after 23 years in Pine Lodge. The estate was transferred to Emily that year and she let Pine Lodge to RJ Lavis. Emily died in 1897 and Sidney Fotheringham ran the brewery and hotels, administered by her trustees. The South Australian Brewing Co bought the brewery in 1932.

Hannah Barnet, widow, bought Pine Lodge in 1899. Her husband William (1834 -1895) was born in Kinross, Scotland. He had arrived in South Australia in 1854 and Gawler in 1857. In 1863, he founded the Local newspaper ‘The Bunyip’ newspaper. Hannah died in 1921 aged 78 after living at Pine Lodge for 22 years. Their three daughters continued to live there, the title remaining in Barnet ownership until 1969.

From 1955 to 1959, a Mrs. Murphy ran the residence as a boarding house. The acre of land on the southern boundary was sold, leaving the estate with the grounds originally held by Frederick Harrison in 1860. More recently, the property has been reduced to the portion fronting Duffield Street. 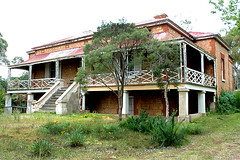 Do you remember Duffield Street 5 - Pine Lodge ? Then Join up and add your memory here.