The single-storey, double-fronted Victorian cottage is constructed of coursed stone with red face brick quoins, all overpainted. The transverse gable roof is clad with slate[?] with parapeted gable walls with red face brick capping to either end. A roughcast rendered chimney with corbelled cap crowns the north parapeted gable wall. Windows to the facade have been altered to include timber-framed fixed pane sashes to either side of the central panelled timber door with fanlight. The straight hipped verandah is clad with slate[?] and supported on square timber posts. The verandah is elevated and accessed via central flight of slate steps, set between splayed dwarf walls with non-original rendered finish. A later addition to the south side is set forward of the main façade and abuts the dwelling and verandah.

Constructed around 1868, the cottage at 7 Duffield Street, Gawler East is associated with the mid-Victorian era of heightened residential development of the Gawler East escarpment.

While it is not as large as many of the villa residences it neighbours, it nonetheless demonstrates a advantaged development with generous proportions and large garden setting. The cottage demonstrates the ‘Gawler’ typology, transverse gable cottage form which is constructed of local Gawler stone and designed to accommodate the local topography with an elevated verandah and prominent access steps.

After his death in 1861 , it passed back to William Paxton, one of the original promoters of Gawler East. In 1865, Paxton disposed of all his East Ward holding to individual buyers. Rate books indicate that Allotments 220 (High Street) and 309 (Duffield Street) were held by Paxton until around 1868 when ‘Mrs Clark’ was owner of a residence and stable, listed as being located on Lot 220 and occupied by William R Lewis. At the time, Lewis was a Solicitor and Notary Public and Chairman of Trustees of St George’s Anglican Church. An assessment in 1875-6 does not list an owner of the property, but that it is occupied by HJ Garrood and ‘Clark’s trustees’; the following year Joseph Freak is listed as owner and occupier. The Certificate of Title of 1876 supports this with the title being held by Emma Laura Freak, wife of Joseph Freak, Fireman of Gawler West.

Following Eliza’s death in 1896, the title passed to Louisa Sarah McCallum in 1907 and William and Mary Baker in 1920. It is understood the present battle-axe allotment was formed around 2005. 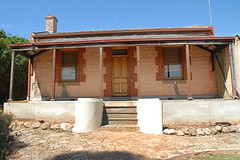 Do you remember Duffield Street 7 ? Then Join up and add your memory here.