A distinctive Art Nouveau-influenced Federation era bungalow located on a sloping corner allotment, allowing for a lower level at the rear. Constructed of dressed face stone with overpainted brick dressings, the design addresses the northeast corner. The Dutch gabled corrugated galvanised iron roof extends to form a wide raked return verandah on two sides, with a corner bay gable featuring roughcast and half-timbering effect and roughcast rendered chimneys. The verandah features a curvilinear timber valance and corner brackets, echoed in a low roughcast dwarf wall enclosing the verandah. A large circular window is centrally located in the corner bay, and other windows include timber-framed headlight sashes.

Rear additions and various outbuildings are of later construction. The property is bounded by a non-original timber picket fence with Cyclone wire gates.

Not developed until at least the early 1900s, this allotment was part of the early subdivision of Gawler East and was part of a larger land holding owned by prominent pioneering Gawler figure, Dr Barry Cotter, common to land holdings following the early subdivision of Gawler East. The dwelling demonstrates a later stage of development within Gawler, succeeding the time of major growth in industry and commerce, when the town had been virtually fully developed. The dwelling is a good and substantially intact example of residential development of this era within Gawler, displaying finely detailed local stone and brick, and distinctive timber detailing.

An early historic plan of Gawler East and rate assessment books from 1859 to 1867 indicate that the subject property was not taken up immediately. In 1868 Allotments 351, 352 and 353 were owned and rated collectively by Frederick F Turner (Auctioneer and later Mayor of Gawler) and occupied by William Samuels as ‘cultivated land’. The parcels continued to be rated as a group and described as ‘land’, ‘paddock’ or cultivated land’ until at least 1890.

The first available Certificate of Title, dated 1913, lists Arthur Evans Williams, Gawler Physician and Surgeon, as owner of the property. By that stage the subject allotment, Pt 351 had been subdivided from the balance of land fronting Daly Street. 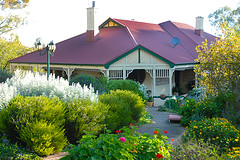 Do you remember East Terrace 7 ? Then Join up and add your memory here.