The dwelling comprises a single-storey double-fronted cottage of sandstone construction in the late Victorian style with tuckpointed dressed stone façade and stone rubble elevations elsewhere. The fall of the land to the rear allows for a half basement level behind. A hipped roof is clad with corrugated galvanised iron and features rendered chimneys with moulded caps and acroteria at the roof corners. The symmetrical façade features rendered quoins and dressings, later overpainted and a central entrance with fanlight and non-original glazed door. The entrance is flanked by two timber-framed double-hung sash windows with arched heads. A convex profiled verandah screens the facade with rendered entrance steps, timber-framing, corrugated iron roof, cast iron brackets and cement paved floor. The property is fenced by a non-original timber lattice fence and other alterations include a rear addition and outbuilding.

Constructed sometime during the 1870s, the cottage at 2-4 Edith Street demonstrates the subdivision and development of ‘Mahoney’s Paddock’ from 1873. As such, its demonstrates the early uptake of the Gawler East subdivision for quality residential development constructed at a peak time of industrial and commercial growth in Gawler. The largely intact Victorian era cottage displays quality local stonework, brickwork and cast iron and distinctive ‘Gawler-style’ form.

Section 4 of the Gawler Special Survey was originally granted to John Reid and Henry Dundas Murray in October 1839. Forty acres of this land, laid out as ‘Gawler East’ and located east of Murray Street and north of Lyndoch Road, were obtained by Doctor David Mahoney and his wife Eliza, nee Reid. Mahoney had arrived in Gawler in the late 1840s and thereafter practiced as Gawler’s second resident doctor. His large landholding, ‘Mahoney’s Paddock’, as it was commonly referred to. By 1860 his substantial residence ‘Yenda’ was completed. The subdivision of this land, part of Section No.4, Hundred of Nuriootpa, appears to have been surveyed and subdivided prior to 1863 but was not offered for sale until March 1873. At this time Edith and Blanch Streets were formed and named for Mahoney’s two daughters, Jane Edith and Blanche Mathilde. Interestingly, all official land records, including certificates of title, rate assessments and mapping erroneously record ‘Blanch’ Street without an ‘e’.

The subject land, Allotment 272 was transferred from Eliza Sarah Mahoney to Elizabeth Johnson, widow of Edward Johnson in 1875. The property changed hands quickly a number of times – from Elizabeth Johnson to Henry Edward Bright (1875) to Nicholas Colonette (1876) then John Mays (1877). Mays was recorded as a ‘Miller’ and newspaper articles of the time indicate that he may have been an overseer at the Albion Mills. Mays, too, held the property for a short period and it transferred to Owen Lynch, Watchmaker, in 1878. 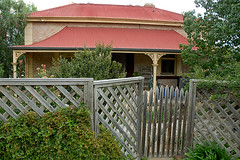 Do you remember Edith Street 2-4 ? Then Join up and add your memory here.