This prominent single-storey, double-fronted Victorian villa with projecting bay is located on a corner allotment. It is constructed of dressed bluestone to the façade and sandstone rubble side walls, with a tuck-pointed finish and overpainted brick dressings. The hipped roof with projecting gable is clad with corrugated metal, with a parapeted wall to the projecting bay featuring canted brick detail. Windows are timber-framed, double-hung sashes with shaped brick hood mould to the projecting bay and the main door features a fanlight. Concave verandah to the facade is clad with corrugated galvanised iron and supported on square timber posts with simple cast-iron frieze and corner brackets. The original fence is of rendered masonry and brick detail and piers, with a non-original wrought-iron gate.

The residence at 16 Eighth Street, Gawler West demonstrates the marked increase in residential development in Gawler South attracted to the area by the establishment of local industry; May Bros. Engineering Works was established in 1885 in nearby Eighteenth Street, Bassett Town. Frederick Eyers, the developer of this property was employed at May’s as a wheelwright at that time. The Victorian-era villa displays a distinctive ‘Gawler’ typology in its composition and use of local materials and design devices, complete with defining stone wall to front boundary.

The history of ownership is unclear prior to the issuing of the first title in 1 889, at which stage it was owned by Frederick Eyers, Wheelwright of Willaston. The title then passed to Clifford Frederick Eyers, Iron Turner of Gawler Town South in 1910 and Susan Brown, wife of Matthew Brown, Produce Merchant in 1920. Frederick Eyers had arrived in the Gawler district in 1863 and was working as a wheelwright to May Bros when the title was drawn, having done so since 1885; he nominated as Gawler Candidate for North Ward in 1901 [but not elected] and was an active community member as part of the Gawler West Methodist Church and Sunday School, the MU Oddfellows and the Wilmington Lodge.

Please <click here> to view a photo of 16 Eighth Street. 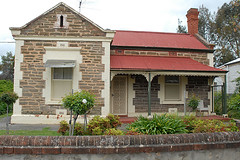 Do you remember Eighth Street 16 ? Then Join up and add your memory here.