This single-storey, double-fronted late-Victorian cottage is constructed of coursed dressed bluestone to the façade, and random coursed bluestone with a tuck-pointed finish to the side walls. The steep hipped roof is clad with corrugated galvanised iron. Windows are timber-framed, double-hung sashes to either side of the central panelled timber door with arched head and fanlight. Chimneys of red face brick with corbelled caps are evident. The concave verandah is clad with corrugated galvanised iron and supported on square timber posts with moulded caps and decorative cast-iron frieze and corner brackets.

Part Allotment ‘T’ was held by Samuel Bruce Rudall of Gawler, Solicitor, in 1885 when the first available title was dated. At the time of transfer Samuel Rudall was a local solicitor and Town Clerk of Gawler, succeeding his father, John Rudall. Samuel and his father were business partners together in notable Gawler practice, Rudall and Rudall. In 1906 Samuel entered Parliament as the member for Barossa; he eventually retired from his position as Town Clerk in 1914 after 32 years in the role. Samuel Rudall also purchased land in Duffield Street (Lots 390 and 391) in 1885 and is listed as later occupying that land in 1889.

In 1890 the property transferred to Otto Wachsmuth, of Gawler, Sadler, and in 1897 to his wife, Mary following his death. She transferred the property to Patience Sanderson, wife of Gawler miner, Robert Sanderson that same year. It would appear that the property was subdivided and a small portion on the northern side was sold in 1920. 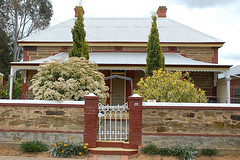 Do you remember Eighth Street 20 ? Then Join up and add your memory here.