This double-fronted, symmetrical late-Victorian villa of grand proportion is elevated from the street and was set on a generous allotment which has since been subdivided. It is constructed of random coursed sandstone with a tuck-pointed finish, red face brick quoins and dressings to the facade, and side walls of red brick. The hipped roof is clad with corrugated metal. The central door is timber panelled with sidelights and fanlight, with timber-framed, double-hung windows to either side. Chimneys are overpainted brick with shaped-brick caps. The return bullnose verandah is clad with corrugated metal on timber posts with carved timber frieze panels. Prominent central steps with rendered side walls and piers provide access to the verandah. An early woven wire fence, with later stone piers and palisade gate, defines the front boundary. A large single-storey stone outbuilding is located within the front setback of the villa; details are concealed by vegetation.

The dwelling at 34 Eighth Street, Gawler South, demonstrates the marked increase in quality residential development in the area being bolstered by Gawler’s prosperity and attracted by the establishment of local industry, specifically Fotheringham’s Cordial Factory, adjacent. Of additional significance is the large detached stone shed, which may be associated with the use of the property by the owners of the adjacent cordial business. The fine and substantially intact late-Victorian era residence displays a commanding, elevated siting and generous proportions. The residence is associated with prominent local businessmen David Fotheringham and, later, William Haydon who purchased Fotheringham’s cordial business.

Section 3 of the Gawler Special Survey was originally granted to Henry Dundas Murray and E Moore in 1839. A portion of Section 3, Hundred of Mudla Wirra was laid out as ‘Gawler Town South’ in 1858. This followed completion of the main railway to Gawler and Station, located nearby to the west in 1857. According to the original plan of subdivision and Certificate of Title, Eighth Street was originally named ‘Water Street’. A concentration of industry occurred within Water Street, including D and RJ Fotheringham’s Cordial Factory, established on the adjacent property to the north, Lot 2. That factory site was originally the site of a flax mill established by CG Roediger in 1873. While the eastern side of the street was largely developed with smaller cottages, the western side evolved to include a number of substantial dwellings on the larger allotments between the industrial sites.

The subject property, Part Lot 1, was under ownership of James Stone, a Gawler Farmer in 1890. It was transferred to David Fotheringham, the founder of the adjacent cordial factory that same year. On David’s death in 1901, the property passed to his widow, then to William Summerton, Wheelwright. From 1912 it was owned by William Lloyd Haydon, Cordial Manufacturer. Haydon’s business, WL Haydon and Company had taken over business of the adjacent factory in 1905. By 1949, the lot was owned by William Walter Burnett Haydon and in 1951 was subdivided to form a battle-axe block. 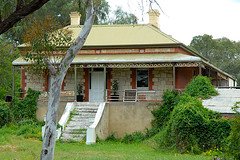 Do you remember Eighth Street 34 ? Then Join up and add your memory here.