Bob Fielke was born at Lobethal on 24th December, 1938, only son of Laurie and Frieda Fielke. The family home was at Mount Torrens. He attended the Spring Head Lutheran School, and the Birdwood and Norwood High Schools. During that time he visited the Lobethal cricket bat factory and commenced playing cricket.

Following his schooling, Bob attended the University of Adelaide and the Adelaide Teachers College and became a secondary school teacher. He taught at Whyalla, Angle Park and Nailsworth for 8 years. In 1968, he took up the position of Vice Principal of the Gawler Adult Education Centre [later TAFE], and worked there for 14 years; managing educational programs for adults.

With his wife Yvonne, and their three sons, Bob settled in Gawler, living in a newly built home. After 14 years at Gawler TAFE, Bob was transferred to the Elizabeth TAFE College, where he managed the School of General Studies and the School of Business Studies. He remained there for a further 14 years.

Bob’s father, Laurie Fielke, had commenced making cricket bats at Murray Bridge in 1965. Laurie died in 1987 and his brother Ron Fielke, at Yankalilla, took over the bat-making enterprise. Ron taught Bob the skills of bat-making in 1992 and 1993, when Bob took long service leave from TAFE for three months each year.

In 1994, Bob left TAFE to take on cricket bat making at his home in Gawler. Upon commencing as a bat-maker, Bob celebrated 100 years of cricket bat-making in South Australia. Ewald Kumnick made cricket bats in Lobethal from 1894. He was the first bat-maker in Australia. His factory in Lobethal operated for about 70 years.

Bob traded as Fielke Cricket Bats and, besides handcrafting cricket bats, he also made gifts, souvenirs and trophies, and repaired bats of all brands. He conducted tours to demonstrate bat-making and gave talks on the subject to community groups. Besides his workshop, he had a showroom to display and sell his products and to show historical items. 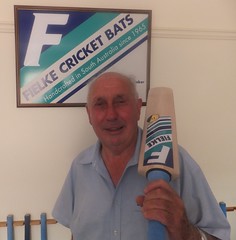 Do you remember Fielke Robert (Bob) ? Then Join up and add your memory here.