This single-storey, double-fronted Federation-era villa is located on an elevated corner allotment adjacent the railway station. It is constructed of coursed dressed bluestone with a tuck-pointed finish. The dwelling features Edwardian detailing in the carved timber bracketed eaves. The hipped is topped with a gable form with louvred vent, all clad with corrugated galvanised iron. Windows are timber-framed, double-hung sashes with distinctive herringbone patterned heads and the main door features sidelights and fanlight.

The chimneys are tall and constructed of brick with corbelled caps. The return bullnose verandah is clad with corrugated galvanised iron on timber posts with a heavy cornice mould. A timber-framed sleepout conceals a portion of the façade to the north-east corner.

Constructed around the turn of the twentieth century, the dwelling at 2 Fifteenth Street, Gawler West demonstrates the ongoing strength of residential development in Gawler West from 1857 to a peak demand around 1900. Demand for residential allotments was driven by ongoing industrial development which was focused around the nearby Gawler railway Station. The dwelling is a good and substantially externally intact example of a large Federation-era villa constructed of local materials which occupies a prominent ridge location adjacent to the station.

A portion of Section 2 Hundred of Mudla Wirra, originally granted to Henry Dundas Murray and EW Jerningham, was laid out as Gawler West in 1857. In October that year an advertisement appeared in the South Australian Register calling attention to proposed extensions of the Gawler Township from River Street to the South Para, to which Hanson Street would also be continued, ‘The extension will thus practically make one Township of Gawler West, Gawler Town and Willaston’. It stated that the survey would be commenced as soon as the line of the Kapunda Railway had been finally settled; and the new portion would extend from Gawler West and Gawler Town to the Railway Line. ‘Hanson Street’ was later changed to Fifteenth Street.

Walter Edward Mounster, an electrical fitter for the South Australian Railways held title to the property in 1902. A small portion along the western side of the lot was transferred to the South Australian Railways Commission in 1912. In 1918 the property was transferred to John Henry Smith, of Gawler, farmer, and then to Smith’s executors in 1927.

The dwelling was likely constructed around the turn of the twentieth century. 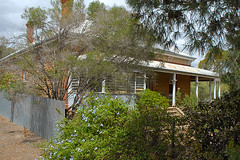 Do you remember Fifteenth Street 2 ? Then Join up and add your memory here.