This symmetrical pair of attached villas with projecting gables is an example of mid-Victorian construction with typical Gawler-style detailing in the shaped brick hood mould, cornice moulds and gable vents. The gabled roof with projecting parapeted gables to either end (front and rear) is clad with corrugated galvanised iron. Parapet walls feature shaped red brick capping. Windows are timber-framed, double-hung with divided sashes and arched heads, and doors are panelled timber. Chimneys are red brick with dentilled bands. The concave verandah is supported on timber posts with differing cast-iron detailing to either dwelling. A rendered masonry wall divides the verandah between the two dwellings. A roughcast rendered wall with arched coping defines the front boundary.

The attached pair of mid-to-late Victorian-era dwellings at 7-7a Fifth Street are associated with and demonstrate the ongoing suburban residential development of Gawler South following subdivision in 1858 and the need for modest accommodation during a phase of rapid growth of the township in the second half of the nineteenth century. The attached dwellings are a good and largely externally intact example, constructed of local materials in the distinctive Gawler ‘paired villa’ typology, completed by a characteristic stone wall to the front boundary.

Section 3 of the Gawler Special Survey was originally granted to Henry Dundas Murray and E Moore in 1839. A portion of Section 3, Hundred of Mudla Wirra was laid out as ‘Gawler Town South’ in 1858. This followed completion of the main railway to Gawler and Station, located nearby to the west in 1857. The area provided affordable land and generous allotments and thereafter general ‘suburban’ development occurred. According to the original plan of subdivision and Certificate of Title, Fifth Street was originally named ‘Houghton Street’.

The first available certificate of title for Part Allotment 160, dated 1914, indicates Arthur McLean, Traveller, of Kalgoorlie was in ownership of the subject property at the time. Mary Jane McNeil, Widow of Jamestown then held the title from 1916. Labourer, William Henry Bradshaw, of Snowtown took ownership from 1920. It appears that both dwellings were in the same ownership until around 1955, suggesting that they were developed to respond to increasing demand for affordable accommodation or as an investment.

Please <click here> to view photos of 7 and 7a Fifth Street. 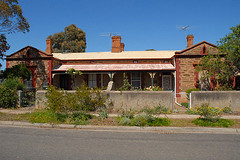 Memories of Fifth Street 7-7a

Do you remember Fifth Street 7-7a ? Then Join up and add your memory here.