In the early 1980s, local man Barry O’Brien had a dream to start a baseball club in Gawler.

To gauge the amount of support his dream would receive, he entered a team, Gawler Bunyips, in the winter competition with a home ground at Gawler High School. Quite successful, the team won a premiership in one of the lower grades, but after a couple of years, support for the team dwindled and the club was disbanded.

The desire to start a Gawler club remained, but he made a vow that the club would not start until a suitable ground could be found. From bitter experience, he knew the effect that being a baseball nomad had on a club and vowed never to attempt to start a club until a home ground was established.

As coach of Central Districts for various tenures from the early 1970s to the mid 1990s, the Centrals club could never find a permanent home ground, playing at about 10 different sites over its years of existence. The Central Districts club folded in the late 1990s, due in no small way to its – and the local council’s, inability to secure and supply a home ground.

In early 2007, the Gawler Harness Racing Club expressed interest in finding a tenant to occupy the ground in the centre of its trotting track. It was perfect for baseball - enough room for two diamonds, with a good bore to supply water as well as lights that could be adapted for evening social games of Slow Pitch, softball or training. Negotiations were well under way for the baseball club to occupy the grounds when the government dropped a bombshell – they intended putting the new highway straight through the middle of the track.

By this time, Barry and his close ally Robert Laidlaw had secured the assistance of the Northern Region Sports Academy. After discussions with the Gawler and Districts Softball Association, the new baseball club was invited to play every second week at the beautiful Karbeethan Reserve on Angle Vale Road, Evanston Gardens until a permanent home ground was found.

Robert, then a journalist with local paper The Bunyip as well as the author of a number of sporting books, took on the job of club secretary and publicist with Barry as president.

Mike McClarty was appointed Club Coach to guide the onfield endeavours of the club. An experienced campaigner with experience coaching a number of Division 1 clubs, Mike was the ideal person to teach the game. Without knowing what the response would be, a practice was called for August the 26th with the full support of SA Baseball. SA Baseball’s Ben Arthur ran a series of Yardball clinics in local schools and handed out leaflets.

Junior Baseball Head Coach Ron Harvey attended the first training session and it was pleasing that about 30 children and 15 adult players attended. Of these, only about half a dozen had played the game before. There was no shortage of volunteers for committee positions. Ken Clark and son Shaun, who had previously been involved with Central Districts, put their hands up to prepare the grounds. This was an arduous task as a mound has to be built for every home game. Permission was not given to establish a permanent mound, so Shaun, through his business K&S Dingo Diggers constructs the mound around a fibreglass wedge loaned by SA Baseball.

The club needed a name and after suggestions such as Bunyips, Locomotives (Gawler was famous in its early days for building steam trains) Pirates, Twins (after the merging of the two rivers) etc were considered and discarded, Gawler Rangers was decided. The club’s colours were the same as the Texas Rangers – and also Glasgow Rangers – red, white and blue. Pat O’Brien, the club’s first treasurer, formed the basis of the design for the club logo.

Many enquiries came to club representatives re a Teeball competition and committee person Mary O’Connor volunteered to be organiser. Four teams played in the Saturday morning competition at Karbeethan.

When the club started, the Gawler Council expected Karbeethan to be doubled in size within 5 years and a permanent ground capable of housing two diamonds was promised. However, this has not eventuated so far.

Meanwhile, the club is very happy to be at its present location at Karbeethan and is now a full partner in the association. The original aim of the club was to have Division 1 and 2 teams within 5 years, but this has not been achieved.

The club has produced some very talented young players including medallists and won under age premierships. However, until the club attains Div 1 and 2 status, players wishing to play at the highest level must move to another club to play top grade baseball.

A new club has to battle a bit before things run smoothly. Gawler Rangers moved to Willaston Oval for two years, a perfect set-up for baseball, but negotiations with the football club for further tenure broke down due largely to pre-season demands of football.

In 2014 the club fielded teams in three adult divisions as well as Under 17, U15, and two U13 junior teams. There is also a strong teeball competition.

Gawler Rangers Baseball Club Inc. is very proud to have given hundreds of people, young and old alike, the opportunity to play a healthy sport to which otherwise they would not have had access. 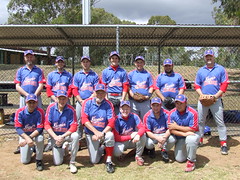 Do you remember Gawler Baseball Club ? Then Join up and add your memory here.