The Gawler Bridge Club commenced over 25 years ago in 1987. The club was founded by Phil Gue and operated out of humble beginnings in a small building in the main street of Gawler.

The club had several venues in Gawler including the Willaston Football Club, the Gawler Race Track and now operates from The Elderly Centre on 14th Street Gawler and has continued at this venue for over 15 years.

From a small group of bridge playing enthusiasts, the club now boasts membership of 60 members and at least 10 of those founding members are still playing at Gawler today!

In 1987 our 1st President was Ian Cooper and the Clubs Honour Board reflects the past and present committee. Our club has 5 life members with Phil Gue being our 1st Patron (2004-09) and Beryl Ey (founding member) is our current Patron.

In memory of our past members, players compete for several trophies during the year including: John Chambers, Lois Duke and Alan Bruer cups. Our club holds two Congress per year (Autumn Pairs and Winter Teams Event) and both Congress well supported along with inter-club challenges.

We are affiliated with ABF and masterpoints allocated accordingly. We are using Bridgemate to score our weekly evening and day sessions, and a dealing machine for our boards create competitive play.

The Gawler Bridge Club committee strongly endorse the encouragement of attracting new members to our club. Bridge Training Courses are continually being held throughout the year and a strong emphasis is placed on advertising our clubs activities.

Twenty seven years ago in 1988, Phil Gue, who was a teacher at Gawler High School at the time, held classes for persons wishing to learn or further their knowledge in Contract Bridge. His son Joel was five or six years old then and was often a visitor. Joel has progressed to become a very proficient Contract Bridge player. Our first President was Ian Cooper, followed by Jill Allanson. We used the Women’s Rest Rooms on the corner of Murray Street and Cowan Street initially, and met on a Tuesday night. John Chambers was secretary but he unfortunately died in 1992. In 1992 we moved to our second venue, the Willaston Football Club. There were 36 members by then. Lois Duke was then Secretary for the next 14 years. Later we moved to the Gawler Race Course Clubrooms and became affiliated with the ABF in 1994. In 1996 Eunice Handke decided a Friday afternoon was needed as well as Tuesday night so we moved to the CWA rooms in Reid Street. We started with 4 tables then attendance increased to 10 tables. It was a very successful venue.

In 1998 we moved to our present club rooms at the Elderly Centre in 14th Street Gawler. We now play two sessions a week, Wednesday evening, with seven tables and Friday afternoon with about ten tables. The Club holds three Congresses a year; in March, May and November. Participating members from other clubs such as SABA and the Adelaide Bridge Club enjoy our hospitality and delicious lunches. We enjoy entertaining them too. In the last three years, Jeff Williams has set up our Gawler Bridge Club Website (www.gawlerbridgeclub.org.au) and enhanced our computerised play with ‘Bridgemates,’ a program that enables players to enter their contract and results as they go. At the end of the days play, final results are printed within minutes of finishing, then results uploaded to our new Altosoft Website where players are presented with a very detailed summary of their play. The club has purchased a laptop and printer to support these changes. We have also changed from a written bidding system to card bidding, which is also in line with SABA & other Bridge Clubs. New Bridge tables and 30 side tables have been purchased and we are currently working with the Elderly Centre to purchase suitable armchairs for greater comfort and support for players. New banners on the footpath also advertise when our sessions are being held. Two social events are held each year. One during July and the other at Christmas which are a lot of fun. Currently we have about 19 ‘beginners’ under the tuition of Michal Koziol, who conducts classes for 6-8 weeks with help from other club members, at the beginning of each year. The new players then move into a supervised group and then progress into the main group. At present we have 90 members. At this point in time, 2015, we have 4 Life Members, Beth White, Beryl Ey, Ann Matthews and Peter Janes, all of whom have been with the club since its inception. Presently, we have a very active President in Jeff Williams, plus an efficient committee and happy members which makes for a successful club. We are a Bridge Club that is moving and growing. 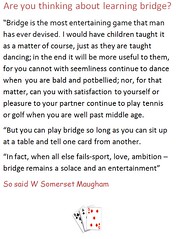 Do you remember Gawler Bridge Club ? Then Join up and add your memory here.