The Norfolk Pine tree was planted c1872 at the south-western corner of Jacob and Reid Streets. The house on the property was built by Edward Clement, Mayor of Gawler 1869 and 1870. By 1980 the tree stood at 33.2 meters.

Derek Sutch established his carpet and furnishing business close-by and, with this tree in his car-park, he first decorated it for Christmas 1977. Derek used 640 coloured 240W globes. He repeated creating this illumination until 1986 when his business was destroyed by fire. [Derek relocated his business temporarily at Zeebos and then opened a shop on Main North Road near Terry‘s Tiles.]

Derek died on Easter Monday 1993 and the “The Sutch is Light” committee was formed in his memory. The Committee comprised of John Thorpe, Craig Barnet, Brian Barton, David Jensen, Gino Vallelonga, Steve Armstrong, Joy Sutch, Doug Petty and Kevin Hicks. The fundraising commenced in June and by November the required amount of $46,000 was collected. (The lights and their installation alone cost approximately $46,000). John Thorpe purchased a Bob Fielke cricket bat, got it signed by Sir Donald Bradman and auctioned it off to raise $14,000. John said that the Committee was successful because there was no negativity.

The Committee organised that the tree was re-lit for Christmas 1993 and dedicated the occasion to Derek. The tree then embraced 23,000 fairy bud light 24v globes, 78 flashing strobes, 56 transformers and it was topped with a 2.4m high neon star. Electrical cables totalled 6 kilometres and all of this was attached to the trunk and branches by expandable straps; allowing the tree to “breath” and grow. No nails or screws were ever used. The lighting was in 3 phases: white-lights on one, coloured on another and the star on the third phase.

The first illumination was viewed by Dr John Hewson AM [Leader of the Federal Liberal Party] and Dean Brown [Premier of South Australia] and 6,500 people.

In 1995 the event theme of “Australia Remembers” was attended by Bazz and Pilko and Peter Plus and the 4 and a half hours of evening festivities included performances from the Gawler Town Band, Gawler Pipers, Humphrey B. Bear, fly-past sky-divers, and Chunky Custard provided the finale. There were Planes, Search Lights and Air-Raid Warnings, with the event concluding with a huge fireworks display. Over 20,000 people gathered to witness the illumination; purported to be the largest crowd ever in Gawler. As a testament to the professionalism of the Committee, they were successful to secure the Warner Brothers “Looney Tunes” characters to appear in Gawler – the only time that they had ever appeared outside of either the Westfield Shopping Centres or Warner Brothers Studios.

In 1996, the theme was “Children” and Qantas was a major Sponsor. There was even a coin-operated device installed so that once the $2 coin was received, the tree was lit and the donor heard Bazz and Pilko give a 2-minute oration regarding the occasion. It was claimed that the tree was the tallest living Christmas Tree in the Southern Hemisphere.

At the end of 1996, it was decided that the tree was in decline and that it should not be lit up. The Committee disbanded and Mike Johnson had the tree chopped down after 1998, possibly 2002.

Thankfully, the tree trunk was cut into very long [6m] pieces and a gentleman bought the lengths and stored them in his shed. Many years later, in 2010, the Pinnaroo Hotel was being renovated. The then owner Shane Wilkin was aware of the existence of these lengths of timber and he secured them and had them totally transformed into the front bar tops and surrounding ledges of the Hotel, where they are appreciated today. We thank Pinnaroo Hotel’s Tyrone Richardson for providing the 4 lovely photographs.

The formation of “The Sutch is Light” Committee to organise the lighting of Gawler’s Christmas Tree exemplifies the passion that exists in Gawler to achieve successful community events. The Committee was most grateful for the very helpful support given by the Gawler Council staff and its Elected Members.

Please <click here> to view the 4 lovely photos of the Pinnaroo Hotel front bar, the Christmas Tree and the 1993 video of the Gawler Christmas Tree. The additional 1998 video was taken from Brian's front veranda in Daly Street - that is how prominent the tree was within the Gawler landscape. 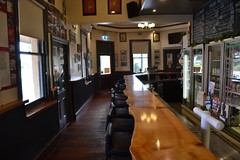 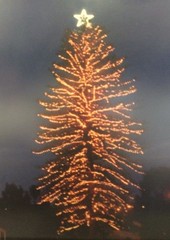 Do you remember Gawler Christmas Tree Lighting ? Then Join up and add your memory here.