The Gawler Institute & Museum, when it relocated to the new purpose building in Murray Street in 1870, already had a remarkable and significant literary collection, natural science collection, unique historical artefacts including early maps and terrestrial globes dating from the early 19 th century if not earlier. From my research on the collection I know that the Gawler Institute (& Museum) had in 1857 a collection of manuscripts and autographs by Humboldt to Schomburgk, there were also early specimens of flora, fauna, aboriginal artefacts, minerals, coin collection and more. The Gawler Institute and Museum play a vital role in the pursuit of natural science not only in South Australia but Australia and the rest of the world in the 19 th century. I know that this pursuit of science and a broader intellectual view of the world…don’t forget Darwin’s origin of the species was not published until 1867 – what was unfolding within the Gawler Institute was culturally and intellectually advanced. From documentation I have ascertained that the new Reading room in the Gawler Institute had a map of the world and an early map of Australia. It also had two globes. I do not know what happened to the maps or the globes but they were rare artefacts. I have been commissioned to put together the first exhibition for the new Gawler Heritage Gallery and while researching I have come across two early maps at the conservation framer Jodie Prymke of North Adelaide. Jodie’s reputation extends far beyond the shores of Adelaide not only in the world of conservation framing (she is used by Artlab Australia) but her framing of maps is exquisite. I visited Jodie a few months ago and saw that she had two unique and rare maps – similar to what may have been in the Gawler Institute in the 1870s. The first map which captivated me is the one of the Southern Hemisphere – dated 1816. I have not seen a map dated from this period which shows the Antarctic – and a complete Australia. The map "Southern Hemisphere Projected on the Plane of the Horizon of London".  is an original hand-coloured engraving of the Southern Hemisphere, c1816, is rendered with a rather unusual projection for its time. This is indicated by the title, the entire Southern Hemisphere is depicted, with Antarctica and the South Pole serving as the primary topographical focal points of the map. It depicts Captain James Cook's voyages in the Southern Hemisphere, each dated and significantly detailed.  Land masses shown include New Holland, New Zealand, most of the islands between Australia and the southern tip of South-eastern Asia, including the Philippines, and the southern tip of South America.  The Sandwich Islands, which were to become Hawaii and the final resting place of Captain Cook, are also clearly denoted. The map is by John Thomson, "Projected & Engraved for Thomson's New General Atlas, 20th Sept 1816.”. Published by J & G Menzies, Edinburgh. Its provenance is clear.

Given Matthew Flinders died in July 1814 and there would have been issues in publishing his maps this is a very early map of the Southern Hemisphere. You need to understand why Matthew flinders adopted the name of ‘Terra Australis’ – it is complicated but the maps framed by Jodie are very unique in terms of how they reflect a radically changing view of the southern hemisphere. Jodie has loaned me the maps which I have passed onto Adrian Shackley to show you. If I could I would buy them – many of you may think they are just maps – but maps define our world and how human society perceives itself. The fact that the Gawler Institute displayed early maps tells us much about the people and Gawler society and its enlightened view of humanity in the 19 th century. These artefacts could be loaned for display they are connected to Gawler’s history and they are also connected to Matthew Flinders – whose body was only discovered a few weeks ago in Camden London. What a story. Here is a little bit on Matthew Flinders that might clarify the importance – finally the people involved in the Gawler Institute and Museum embraced a philanthropic approach to life – they gave back to the community through their donations – finally I hope you like what I have done in the Gawler institute. Matthew Flinders “A Voyage to Terra Australis: Undertaken for the Purpose of Completing the Discovery of that Vast Country, and Prosecuted in the Years 1801, 1802, and 1803, in His Majesty's Ship the Investigator” This was a sea voyage journal written by English mariner and explorer Matthew Flinders (1774- 1814). Flinders in this book describes his circumnavigation of the Australian continent in the early years of the 19th century, and his imprisonment by the French on the island of Mauritius from 1804–1810. The book told in great detail of his explorations and included maps and drawings of the profiles of unknown coastline areas of what Flinders called "Terra Australis Incognita". By this, he was referring to the great unknown Southern continent that had been sighted and partly mapped by prominent earlier mariners such as Captain James Cook. The ship Flinders commanded, HMS Investigator, was a 334-ton sloop. Up until this time the circumnavigation of Australia which was necessary to prove it was a single continent land mass, had never been completed. Flinders achieved this by circling the island continent, leaving Sydney in July 1801, heading north, through Torres Strait, he then went across the top of the continent westward, and south along the western coastline. Matthew Flinders reached and named Cape Leeuwin on 6 December 1802, and proceeded to make a survey along the southern coast of the Australian mainland, and then completing the journey, arrived back in Sydney in June 1803, despite the dangerous condition of his ship. Flinders description of his imprisonment on Mauritius preceded his final return to England in October 1810 in poor health. Despite this he immediately resumed work preparing “A Voyage to Terra Australis” and his maps for publication.

In 1811, after many delays approval for publication of his narrative was finally given by the British Admiralty, however, payment was restricted to the atlas and charts sections. Flinders was left responsible for funding the rest of the work delaying publication until mid-July 1814. He died, aged 40, on 19 July 1814, the day after the book and atlas was published. On 23 July, he was interred in the burial ground of St James's Church, Piccadilly (his burial site was only recently discovered part of major works being undertaken on extending the London transport system.) The full title of this book which was first published in London in July 1814 was given, as was common at the time, a synoptic description: "A Voyage to Terra Australis: undertaken for the purpose of completing the discovery of that vast country, and prosecuted in the years 1801, 1802, and 1803 in His Majesty's ship the Investigator, and subsequently in the armed vessel Porpoise and Cumberland Schooner. With an account of the shipwreck of the Porpoise, arrival of the Cumberland at Mauritius, and imprisonment of the commander during six years and a half in that island". These maps and their stories are just wonderful cultural material. 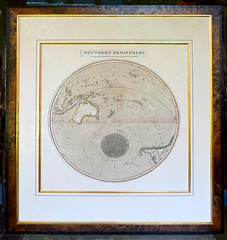 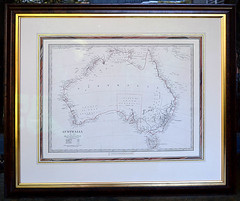 Do you remember Gawler Civic Centre Historic Maps ? Then Join up and add your memory here.