The Gawler Community Gallery is an initiative between the Gawler Arts and Craft Community, The Town of Gawler Council, The Gawler Lions Club, TransAdelaide and Arts SA. It was officially opened on the 26th February 2006 and is run entirely by Volunteers.

The Opening of the Gallery marked the culmination of a five year struggle by Gawler’s arts community for a local community art gallery within the town of Gawler.

It was local Gawler poet (and then Arts Editor for the Bunyip Newspaper), Martin Johnson that set the wheels in motion back on the 2nd of June 2000 with an exhibition of local artists work at the Gawler Arms Hotel. All the contributing artists had been featured on the Arts Page of The Bunyip between 1997 and 2000. The exhibition received much support from the community with 64 people signing a petition supporting more art displays and the need for a permanent art venue in Gawler.

With the disused, historic Gawler Courthouse in mind, Martin teamed with John Spencer (Then Proprietor of local B&B, The Eagle Foundry) to advertise their interest in forming an Arts Group with the initial purpose of establishing a permanent gallery in Gawler for local artists to exhibit their work.

ArtsAction Gawler Inc. was established with the first meeting being held at Gawler's Eagle Foundry on the 29th June, 2000 at 7:30pm. The meeting was chaired by Martin.

During the first meeting it was decided that the group would initially be named 'The Gawler Arts Co-Operative' however due to legal problems with using the word 'Co-Operative' the group voted on the 28th of September, 2000 to change its name to 'Artsaction Gawler Inc.'

Over the next five years ArtsAction Gawler, with local artist and then Gawler local government councilor, Judy Ferguson, at the helm as the groups first and only President, represented the voice of the local arts community and set out to establish a community, not for profit gallery. It petitioned the local council and the State Government to keep the issue and need for a community gallery in the fore front of our community leaders minds.

Along the way the group showcased the work of local artists through member exhibitions held at various venues around the region. It established the Gawler Art Award in August of 2002, a biennial art competition that is still run by the Gawler Community Gallery today. It was a sponsor of the Town of Gawler’s Youth Art Award. As well the group won the SA Great Regional Arts award (2002) for it’s commitment to supporting the arts and crafts in the Barossa and Light region.

It should be noted that there was no real opposition to the establishment of a community gallery within the region. The main hurdles were finding a suitable location and obtaining funding.

As mentioned the group initially focussed on Gawler’s disused, historic courthouse which had been vacant for many years. Owned by the State Government and located on the same lease as the neighbouring Gawler Police Station. ArtsAction, for several years, petitioned strongly for this building to be made available, pressuring the State Government to fast track separating the Courthouse from the Police Station’s lease so the building could be sold to the local council.

Unfortunately, when the courthouse came up for sale by tender in December of 2002, the Gawler Council was unable to secure it and it was sold to a private bidder. It was a very disappointing moment for ArtsAction.

The sale did prompt the Gawler Council into developing an Arts policy, commissioning consulting company, Hames/Sharley, to extensively research the local arts community and to make some recommendations on the cultural needs of the town.

Ultimately the report confirmed much of what ArtsAction already believed and strengthened the groups position on the need for a community gallery.

After the sale of the courthouse many alternate venues were considered including the Station Master’s House (Northern Markets Complex) Gawler South Hall (Adelaide Road), the hallways of a proposed revamped Civic Centre building (Murray Street), rooms in a proposed upgrading of the Gawler Sport and Community Centre and even a vacant private residence owned by a local lawyer.

In January of 2005 ArtsAction got word that then Mayor of Gawler, Tony Piccolo, had been negotiating with the owners of the Gawler South Hall to develop the building as a community art gallery with the hope that council may agree to paying the commercial lease for the first few years.

Over the next two months the Mayor, along side ArtsAction, championed the cause for finding a gallery (determined to keep a promise to good friend Judy Ferguson to establish a community gallery before his time as Mayor was up). Between February and March 2005 he chaired a number of meetings the last of which was a public meeting held at the Gawler Country Women’s Association’s Clubrooms on March 16th and was attended by 30-40 people.

Pat Mells, representing the Gawler Lions, attended this meeting at the Mayor’s request and put forward the Station Master’s House at the Gawler Railway Station in 23rd Street, which the Lion’s club were restoring as part of a Work-for-the-dole project. He noted that the building was intended for community use and could be used as a community gallery for very minimal cost. The meeting agreed that the Lions proposal was the best of all options put forward thus far and agreed to accept their offer.

The Town of Gawler, at its March 2005 General Meeting, gave in principle support to establishing a gallery at the Station Master’s house and invited the arts community to submit an application for funding (whilst giving no particular level of support) to be considered in its 2005/2006 budget discussions.

Although ArtsAction was intended as an umbrella group for the Gawler Arts and Craft Community the group’s members decided that the Gallery should have a fresh start with a completely new steering committee that included representatives from some of Gawler’s key arts and craft groups.

ArtsAction ceased to exist as an organisation in July of 2005 when it was clear it had achieved its primary goal of establishing a Community Gallery within the town of Gawler.

Note: If you would like to know more about ArtsAction Gawler the group’s old web site is partially archived at oocities.com. Please be aware that the site is no longer complete, may contain broken links and none of the contact information is current. It is no longer maintained by the Gallery (in fact it was a surprise to us that the site still existed!)

The first Gawler Community Gallery Steering Committee emerged from the public meetings convened by the Mayor between January to March 2005 and included representatives from ArtsAction, The Gawler Art Society, The Gawler Quilters and The Elizabeth Potters amongst others.

It’s first task was to work towards incorporation as a not for profit organisation. This would enable it to apply for funding from the Gawler Council and Arts SA so the Station Masters House could be fitted with gallery lighting, a hanging system and a monitored security system.

At this time the Station Master’s house was still in the process of being restored with its expected completion being towards the end of 2005.

The Gallery was incorporated some time in May/June of 2005 and began accepting paid memberships shortly after ArtsAction Gawler disbanded in July 2005. All previous members of ArtsAction were contacted and encouraged to join the gallery in anticipation of its inaugural exhibition which was planned to showcase local art.

After successfully obtaining funding from the Gawler Council and Arts SA the committee worked to outfit the gallery ready for its official opening.

The gallery was officially opened on February 26th, 2006 by Tony Piccolo, who, by this time, was running for State Parliament as Labor’s candidate for Light.

The inaugural exhibition featured more than 240 artworks by over 100 artists, filling all four rooms and the galleries hallway.

In the years since opening the galleries exhibition program has always been booked out well in advance with many artists exhibiting in their first solo exhibitions as well as many exhibitions featuring artist collaborations and art and craft groups.

The galleries low cost room hire and tireless volunteers has enabled many hobby, semi professional and professional artists to fund their own exhibitions at very minimal cost in comparison to hiring a commercial exhibition space.

The Gallery continues to support local arts and crafts in the region and is used by many established art and craft groups for their annual exhibitions. The venue is also used by local artists participating in the Annual South Australian Living Artists Festival (a statewide festival). 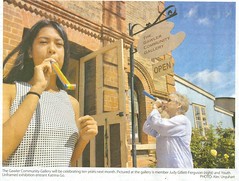 Do you remember Gawler Community Gallery ? Then Join up and add your memory here.