GAWLER HOCKEY CLUB OVER A 100 YEARS OF HOCKEY HISTORY!:

Gawler has a long history of local Hockey, the first meeting to form a Hockey Club was held in the Institute on 13th July, 1903 and the club was a men’s only competition, the first officers elected were:


The first opening match was played on the Gawler Recreation Ground when the local team were defeated by three goals to two. The game gradually increased and the original Gawler Club decided in 1908 to join the Adelaide Hockey Association and finished third on the list.


The club owes much of its success to its past captain, Mr Reg Rudall, who was one of the founders of the game in Gawler.


In the year 1906 a ladies' hockey club, which now deserves to be ranked among first-class clubs, was formed in Gawler with Mr O. D. Jones as President. It received the name of Parafield during the first year with Miss E. Crump as captain and Miss L. Stewart as Secretary. Eight matches were played of which the Parafields Ladies won six and drew two. In the following year Miss N. Limb was appointed captain and of the eleven matches played under her captainship, only one was lost.


The club had even better results during the 1908 season and in every match which they played against visiting teams they were successful. In one of these the Gawler ladies had the honour of beating a team of ladies from the Adelaide University - the winners of the Interstate University Competition.


The club joined the S.A. Women's Hockey Association in 1909 and won the Premiership under Bryce Crump. Five years later, Gawler had two more clubs, Imperials & Excelsior, the latter bringing the S.A.W.H.A. premiership honours to Gawler in 1917.


In 1920, Marjory Martin played in the S.A. team in Tasmania and from then was a regular member of the State side, including the S.A. team which won the All Australian Women's Hockey Association Premiership at Launceston in 1925.


Two other Gawler girls, Ivy Haydock and Aileen Martin, were also in the side, of which Marjory was vice-captain, which made the trip to Perth, W.A. in 1922. At that time Gawler fielded both A & B Grade teams.


Interest in hockey waned in the early 1930's and it was not until 1966 that the popularity of hockey was revived and a full Gawler club was formed. It joined the Barossa Association in 1967 and has achieved considerable success since.
Further information about the Gawler Hockey Club and its history, including past Bunyip articles can be found at the Club website: Gawler Hockey Club 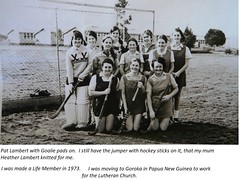 Do you remember Gawler Hockey Club ? Then Join up and add your memory here.