WEIGALL Sir Archibald – Governor – 22 September 1920 An agricultural show is essentially a country man’s holiday, and on Wednesday, the occasion of the annual show of the Gawler Agricultural Society, country people assembled in great numbers to attend and give patronage and to enjoy the social atmosphere that is part of these gatherings. The interest in the exhibition was heightened by the fact of the intending visit of the Agricultural Governor (as he has been so aptly termed), Sir Archibald Weigall K.C.M.G.. Early in the morning all roads led to Gawler, and the magnificent event dawning of the day was a further incentive to bring people out of their homes to revel in bright and genial sunshine. The Town Council was in association with the Agricultural Society in according a district welcome to Sir Archibald, and in front of the Town Hall a massive arch was erected bearing the words “Gawler’s Welcome to our Governor.”

The Governor travelled in a special train leaving the city at 10.30 am, and at Gawler was received by a fleet of motor cars, which in procession slowly wended its way to the town under escort of the mounted police, reaching the rendezvous at 11.30 am. At the building were the Town Councillors, Riggs’ Vice-regal Band, the school children under Mr E Thomas (head master) and his assistants and hundreds of the general public anxious and eager to gain a glimpse of the distinguished visitors. Sir Archibald, Lady Weigall and little Miss Priscilla, on arrival, did not stand on ceremony, and cordially returned the greeting of the Mayor (Mr James Busbridge Jnr) and the Town Clerk (Mr E A Smith), and were introduced to the members of the Town Council and others.

The Mayor gave a welcoming speech and His Excellency replied.

The Governor and his party then visited the Institute where they were received by the President (Mr A H Harris). The Honour Roll, the gallery of public men of the town and the Library were inspected, and afterwards Mr Harris secured the permission to present Sir Archibald with a copy of the late Mr E H Coombe’s book on the “History of Gawler”, and a copy of the “Song of Australia”.

The party were then motored to the Hutchinson Hospital, where they were received by the Matron (Sister Clarke) and the secretary (Mr S B Rudall), and shown over this fine asset to the town. The view from the institution was greatly admired, and the party slowly motored down the hill enjoying the scenes en route to the show ground. 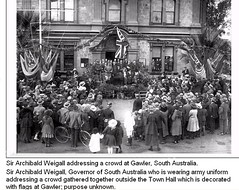 Do you remember Governor Weigall Visit ? Then Join up and add your memory here.