William Mitchell Brown started trading as “Brown & Sons” produce merchants at the southern end of Murray Street in 1902 (Bunyip 13 Nov 1914). His sons learnt the business from their father, with Matthew Herbert Brown taking over around 1911 (Bunyip 13 Nov 1914). By 1914 the Bunyip suggested M H Brown’s was probably the largest egg merchant business in Australia, handling up to 40 000 dozen eggs per week (Bunyip 13 Nov 1914). Shortly after the First World War, Horace Theodore Brown took the business over from his brother, leading to the name H T Brown (Bunyip 1 Aug 1941).

Five years later H T Brown’s, under the management of Mr George W Davis, was setting up to enter the export market (Bunyip 23 Jun 1933). Still in their original premises at the southern end of Murray Street (where the Shell Service Station is now situated), the building then described as “one of Gawler’s earliest”, underwent significant internal alterations and installation of equipment in preparation for increased production (Bunyip 23 Jun 1933). An addition of ‘upwards of 30 girls’ to work as egg testers and packers was sought through an advertisement in the Bunyip, and created a “feminine invasion of the premises” at the appointed interview time, Mr G W Davis telling the paper he had “no idea there were so many girls out of work in Gawler” (Bunyip 23 Jun 1933).

Viv Wehr, who worked for the company for 31 years, recalled the name changed to Farmer Brown Ltd and they relocated from their original premises at the southern end of Murray Street to where Mitre 10 is now situated (Viv Wehr, pers. comm. 26 Aug 2013). They received loads of eggs from Wettlebecks at Tanunda, until their closure, and later from Southern Farmers, until their closure. The company was later taken over by Red Comb (Viv Wehr, pers. comm. 26 Aug 2013). 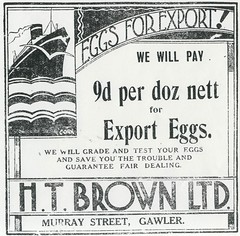 Do you remember H.T. Brown Egg Factory ? Then Join up and add your memory here.