Horse racing began in Gawler very early in the history of the town. The principal race of the State was held in this locality in the second half of the 1840s.

In 1849, a racecourse existed in the vicinity of Gawler South which was sparsely populated in those days. The course was not circular but straight and horses had to sprint to the end of the track, go round a post and race back to the winning post.

In 1856, races took place on three successive days in March and were described as Gawler Town Races.

Some ten years later, Gawler and Willaston races occupied two days and it is believed they raced at Willaston on land behind the original Willaston Hotel (just north/west of the bridge).

On 23 January 1879, a racing club was formed and racing commenced on 15 April of that year at Para Para, a property situated at Gawler West. The property was owned by the Hon. Walter Duffield who readily gave permission for horse racing events at his property. That year, there were 96 members and the sum of £400 was paid in stakes. Races were cancelled the following year due to the ill-health of Walter Duffield and racing then became defunct. The balance of £48 was handed to the present body when it was founded in 1891.

In the early 1880s, there was a revival of racing and the Evanston racecourse was first utilised. The local race club was inaugurated on 17 March 1883.

On 12 March 1891, the present Jockey Club was formed and the first meeting was held on 6 June. A lease of the Evanston racecourse was obtained, and in 1901 the Evanston Racecourse was purchased for £1500. Horse races were initially run clockwise but later changed to anti-clockwise.

In the 1920s, six race dates were allocated to Gawler.

During the years of the Second World War, all meetings allocated to Gawler were held at Victoria Park or Morphettville racecourses. This was due in main to the Military Camp which was based at the Evanston racecourse.

There was a period from February 1942 to October 1943 when racing was banned in South Australia by the Playford Government, so the Adelaide Cup was held at Flemington, Victoria that year. Racing resumed in late 1943 but although bookmakers and totes were allowed to operate on course, betting shops were prohibited.

The South Australian Licensed Victualler’s Racing Club and Barossa & Light Racing Clubs combined to race as Barossa Valley Racing Club in 1960. Their meetings were held at the Gawler racecourse and they eventually amalgamated with Gawler Jockey Club, becoming the Gawler & Barossa Jockey Club Incorporated in January 1971.

The Gawler Jockey Club was legally metropolitan from 1936 – 1967. It became a provincial club on 1 January 1968 with 13 race dates on course. The Totalizator Agency Board commenced in March 1967.

The club continued with maintenance and facility renovations and in 1985, undertook a massive renovation to the underside of the grandstand to include a function room/kitchen for hire and new amenities for members.

The racecourse was utilised for many sporting events and functions. The course was used annually for the Three Day Event including the World Equestrian Event in 1986.

The period of 1986/87 saw the reintroduction of steeplechase racing to Gawler after a closure of 33 years.

Gawler Cup Day was held in November in 1991 with Her Excellency Dame Roma Mitchell, the Police Band and the Police Greys being a major attraction on the day. Sir Eric and Lady Neale were also guests of the club in 1996.

In 1992, the Controlling Body reduced distribution of TAB profits causing predictions of severe hardship to provincial and country clubs. In the late 1990s, Gawler & Barossa Jockey Club was earmarked for closure. This led to one of the toughest times in the Club’s history. However, the club has survived the highs and lows over 150 years with Committees and club employees past and present passionate about its continued existence.

There are two special memorials at the Gawler racecourse. Melbourne Cup winners Gold and Black and Gallilee were laid to rest at the course and if they were to prance onto the newly refurbished course today they would certainly relate to their big days at Flemington.

A new road had to be constructed in 2012 at the southern end of the racecourse. It had to be given a name. It was fortuitous that in 2011, a list of 300+ names were submitted for Town of Gawler to consider as new road names; emanating from “History of Gawler 1837 – 1908 E.H.Coombe, M.P.” On page 145 of that book, the name of Tulloch appeared - Miss J. P. Tulloch was the Dawes Medalist as the female Dux of Gawler Primary School in 1908.

It was wonderful that Tulloch was selected as the road name – that great horse Tulloch being synonymous with racing in Australia.

You can also watch Warren Barrington's address regarding Betting in Gawler on the youTube link to the right. 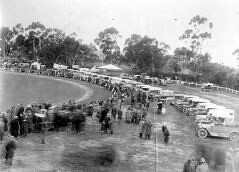 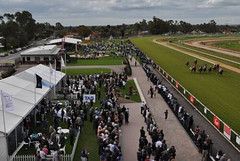 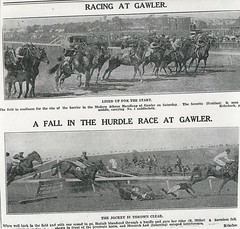 Memories of Horse Racing in Gawler

Do you remember Horse Racing in Gawler ? Then Join up and add your memory here.