The Globe Inn opened in 1851 and was known under this name until 1875 when it changed its Name to the Globe Hotel.

Under this name the Hotel played an important part in Gawler's history. On September 6th 1867, a group of men, including the Mayor of Gawler, Mr. Wendt of Wendts Jewelers, two of his assistants and invited guests congregated at the hotel to raise a toast to the Clocktower across the road which they had just set in motion for the first time. It had just struck 4pm.

The famous “Humbug Society” was formed at the hotel in 1859, it was setup as a spoof on other societies, such as its open policies as opposed to the secret policies of other clubs and societies. The Humbug Society had such an influence that one of its prominent members E L Grundy was elected to parliament in 1860.

To further their humbug influence, in 1863 they founded their own newspaper; if you haven’t already guessed it was called The Bunyip. The Hotel still retains the cast iron verandah and lacework that was added to the building in the 1880’s, this was manufactured locally by the Eagle Foundry. The Globe changed its name to the Kingsford Hotel on the 14th of August 1958 after the historic property of Kingsford north of Gawler which was established by Stephen King, one of Gawler’s founding fathers.

The hotel is still in its original position in Murray Street, although it has been extended over time, but, despite this it still retains its original charm.

The original building was more austere than the existing hotel. In 1851 it was known as the Globe Inn and was renamed the Globe Hotel in 1876. It remained so until 1958 when it was once again renamed as the Kingsford Hotel after one of the original properties of Gawler. The ornate cast iron verandah which includes early cast pillars was added sometime in the 1880's and has been repaired by the Eagle Foundry, the original supplier, sometime in the 1930s. By Rob Richter


For more photos of the Kingsford or Globe Hotel, please click here.

The Kingsford Hotel balcony has been reconstructed with the support of the heritage advisors at the Department of Environment, Water & Natural Resources. We were pleased to receive “heritage” approval for the plan to build an external access / stairway to the balcony on the southern side of the hotel. Access to the balcony was originally from inside the hotel but with modern fire and safety standards this access is no longer possible. So we are now pleased to have a balcony that can be safely accessed and enjoyed by the community.

Perhaps the most attractive feature of the balcony is the fine cast iron lacework, which was added to the hotel in the 1880’s and made at Thompson’s Eagle Foundry in King Street, Gawler. This lacework was carefully removed, restored and finally replaced to complete the job.

WHAT MAKES A PERFECT PUBLICAN? taken from a Bunyip article 7th April 1971

“Description of a perfect publican. He must be a democrat, acrobat and a doormat. He must be able to entertain prime ministers, pickpockets, pirates, philanthropists, press and the police.

“He must be on both sides of the political fence; he must be a footballer, golfer, tennis player, bowler, darts champion and pigeon fancier.

“He must settle fights and arguments; he must be a boxer, wrestler, weightlifter and peacemaker.

“He must always look immaculate when drinking with bankers, swankers, commercial travellers even though he just stopped a “blue” in the bar.

“He must keep the bars full, storerooms full, customers full, but not get full himself. He must have a staff who are non-drinkers, clean, honest, quick-thinkers, mathematicians, technicians, who must, at times, be on his side, customers’ side, but stay inside the bar.

“To sum up, he must be outside, inside, offside, glorified, sanctified and stupefied." 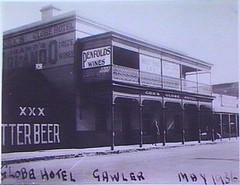 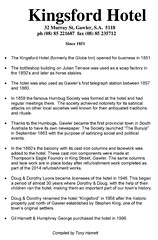 Do you remember Kingsford Hotel 32 Murray Street ? Then Join up and add your memory here.